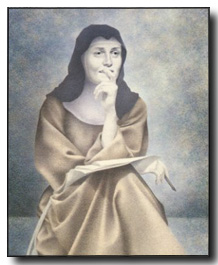 The Church in western Europe was not in such good shape at the end of the 12th century. But it was at this time that the Holy Spirit stirred the hearts of two young people in central Italy, giving rise to the remarkable Franciscan movement.

Clare was born Chiara Offreduccio in 1193 or 1194, the daughter of a wealthy and highly educated family in Assisi. When Francis began to preach the Gospel in the squares of Assisi in 1210 Clare was 16 years old, 11 years younger than him. Even as a child her heart was turned towards the Lord, and she would share her food with the poor and needy people of the town. She had already refused several offers of marriage. At the age of 18, she was captivated by Francis' Lenten preaching of a Christ-centred simple gospel life, and especially his emphasis on poverty as a special vocation. She had several secret meetings with him, accompanied only by a friend, Bona, and made up her mind to join him.

On Palm Sunday 1212 Clare left her parents' house secretly. She had already sold her dowry and given the money to the poor. At the little church of St Mary of the Angels, just below Assisi, she met Francis and a few of his brothers. She changed her dress for a simple habit, and took off her jewellery. Francis cut her hair, and she made a vow of obedience to him. At first she lived with a nearby Benedictine community of nuns, doing simple menial tasks.

Not surprisingly, Clare's family were outraged at what she had done. They sent armed men to bring her back, without success. When Clare's younger sister, Catherine, followed her only a fortnight later, the family made even more violent attempts to force her to return home. They were in fact carrying Catherine away physically, but Clare prayed, and Catherine became so heavy that they could not lift her. Defeated, they returned home.

Francis received Catherine, too, as a sister, and gave her the name Agnes. Then Clare, Agnes and several friends moved to San Damiano, the church where Francis had heard Jesus speak to him from the crucifix, charging him to "rebuild" the Church. Here the first community of Poor Clares came into being. Clare's widowed mother joined as well.

It was said that the followers of Clare were the most beautiful young girls from the best families of Assisi. The community grew rapidly, and in 1215, very much against her will, Clare was made Abbess.

The women devoted themselves to prayer, nursing the sick, and works of mercy for the poor and neglected. The order came to be called the "Poor Clares." They wore no shoes, ate no meat, lived in a house that was unsatisfactory even by the standards of that era. They also kept silent most of the time. They had no beds, but slept on twigs with patched hemp for blankets. Whatever they ate was food they begged for. Clare made sure she fasted more than anyone else.
Clare Remained in charge until her death in 1253. In spite of long years of sickness, we know the depth of her love for the Lord by the letters she wrote. Two years after her death, in 1255, she was declared a saint by the church.

In the early years of the movement Francis visited Clare often, but as his own community grew his visits decreased and she had to find within herself the inspiration she had received from him. Their relationship grew more equal, and Francis would consult her on important decisions. In his last illness he came to San Damiano and Clare cared for him.

Although she called herself “the little plant of Francis” Clare was in fact a powerful and innovative woman, the first woman to write a Rule (a guide to a way of life) for a religious community. She struggled with the institutional church for most of her life, as Popes and Cardinals resisted the renewal movement and sought to draw her away from the poverty which was at the heart of her following of Jesus. But she remained firm and her Rule was finally approved by the Pope himself just a few days before her death. By that time there were more than 150 communities which followed her way of life, mainly in Italy, southern France and Spain, but spreading as far east as Prague, and as far west as Bruges.

God of peace,
who in the poverty of the blessed Clare
gave us a clear light
to shine in the darkness of this world:
give us grace so to follow in her footsteps
that we may, at the last,
rejoice with her in your eternal glory;
through Jesus Christ our Lord.
Amen.
(above from http://www.fministry.com/2012/08/st-clare-of-assisi-consecration-to.html)
Posted by Chiara at 11:15 PM No comments:

Clare at the Feet of the Crucified 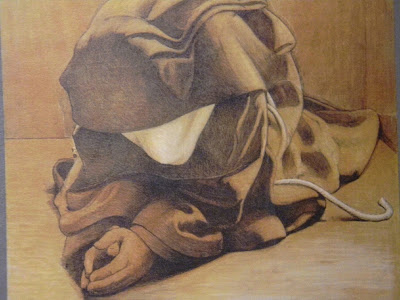 Clare at the Feet of the Crucified

The theme of Jesus Crucified occurs frequently in the writings of Clare, and there is evidence that her devotion included a daily recitation of the prayer of the Five Wounds.  Furthermore, she recommends in a letter to Sister Ermentrude that she consider herself the spouse of Jesus Christ and “meditate frequently on the mysteries of the His Passion and the sorrows of His Blessed Mother at the foot of the cross.” (Letter to Ermentrude of Bruges)

Our Mother Saint Clare focused her meditation on the God-man, the poor Christ who became the most vile of men: rejected, whipped, beaten mercilessly in his entire body, dying the bitter pains of the cross. (Second Letter of Clare to Saint Agnes of Prague)

When she writes: “Observe, consider and contemplate [Him]with the desire to imitate” (Process of Canonization, 10), she is referring to the mystery of the passion and also to the mystery of the Total Christ.  She becomes an imitator of Christ in the enclosure of San Damiano.  Like the Virgin Mary and Saint John, Clare remains at the feet of Christ Crucified.

The sisters who commit themselves to observe the Holy Gospel are, for Clare, collaborators with God Himself and with the weak members of his ineffable Body.  Therefore Clare herself becomes for them and example and a mirror, so that her sisters might see in her the way to love the cross out of love. (Process of Canonization, 10).

In the temptations, in the painful events, in the difficulties, in the sufferings that besiege the soul and in the trials that accompany the entirety of life, Clare who has lived them all exhorts us to remain firm in God with faithfulness and joy.

Like Clare we must begin again, reserving nothing for ourselves, leaving all for the Lord, dying to ourselves in order to give spiritual nourishment to the world by our sacrifices, trusting in God and His promise.

The last song or our Mother ´s life ends with a canticle that is a blessing for us:  Clare invites us to praise God, to give Him thanks for all the benefits he has bestowed upon us. This blessing is a shout of gratitude for the love that God has for all of us.

- By sister Luz Maria Leyva, president of the Federation of Our Lady of the Angeles, Capuchin Poor Clares, http://capuchinpoorclares.org/jubilee/?p=252
Posted by Chiara at 11:14 PM No comments: 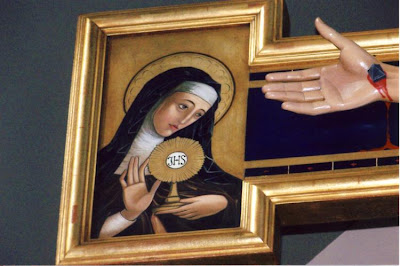 "The love of Jesus Crucified was at the heart of Clare's existence.  This is what gave her life direction, unity, dynamism and splendor."

Our Lord's words to Sr. Mary of the Trinity, Poor Clare nun of Jerusalem 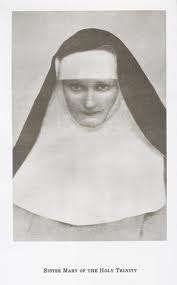 "In each one there is the presence of the Holy Trinity; and in each a distinct character which is 'she' which God has given her in creating her soul; each soul has her own beauty - and glorifies Him in her own individual way.

When that is understood, jealousies disappear.

Each soul has her own mission, special to herself; she must be helped to fulfill it, and to use the unknown reserves of love and generosity that God hides in each soul.

If you understood that, there would indeed be a great stream of cooperation to hasten the coming of My Kingdom...

~ Our Lord to Sr. Mary of the Trinity, Poor Clare of Jerusalem

(helped again with this quote by my good friend, JF!) 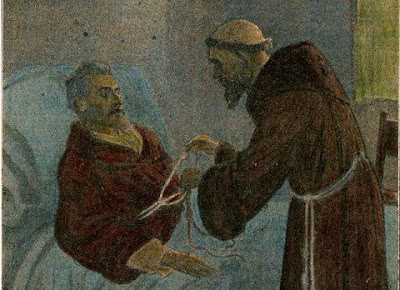 "Bl. Modestino of Jesus and Mary, religious, I Order Franciscan (OFM)
a priest of the Franciscan Order of Friars Minor, an outstanding witness to God's mercy, who instilled hope in Southern Italy during the first half of the last century.

From boyhood, God was pleased to reveal to him the mysteries of the kingdom of heaven (cf. Mt 11:25; Gospel acclamation), leading him to discover the authentic value of the person who is fulfilled through generous devotion to the poor and crucified Christ in the gift of self to others.

Fr. Modestino lived in a society of marginalization and moral suffering, and was able to share fully the expectations and anxieties of the weakest, responding to the deep need for God found in his brothers and sisters who thirsted for justice and love. He thus became a leaven of renewal and a living sign of hope. The hand of the Lord was truly upon him, making him a minister of mercy and comfort to every social class, especially through his diligent, patient celebration of the sacrament of Reconciliation.

Fr. Modestino was a true "universal brother": everyone could rely on him, finding someone who would listen, welcome and share. This love led him to give of his very self, and he did not hesitate to expose himself to the threat of death in order to help his brothers and sisters struck by a cholera epidemic. Indeed, he shared their fate to the very last, dying as a victim of love."


From a homily by Pope Paul II

Posted by Chiara at 5:38 PM No comments: