Raymond belonged to the noble Lull family and was born at Palma on the island of Mallorca in 1236. At a very early age he became a page at the royal court; and before he was 30 years old he had been advanced to the position of marshal and high steward to King James of Mallorca.

For several years he followed the lead of other courtiers, serving the world and vanity. But God in His mercy soon led him along a better path. On the feast of St. Francis he heard a bishop portray in vivid terms the contempt of the world and the love of Christ with which the Poverello was imbued. For some time past Raymond had perceived in himself the desire for nobler things than human honors. So he recognized in the bishop's sermon the call of God to forsake all things and to win for Christ the infidels on the northern coast of Africa.

Without hesitation Raymond followed the call. He resigned his offices, left the royal court, and founded a college in which missionaries, particularly those who belonged to the Order of Friars Minor, should receive the necessary training in the languages of northern Africa. He himself joined the Third Order of St. Francis, and for nine years retired to the solitude of Mt. Randa in order to prepare himself by prayer and study. God favored him with much heavenly inspiration and granted him extraordinary knowledge so that, in spite of his numerous undertakings he was able to write admirable things about the most difficult questions in philosophy and theology.

Raymond then made long journeys to Rome, Avignon, Montipellier, Paris, and Vienne, in order to interest the Holy Father and the various potentates in the work of conversion and the founding of seminaries for missionaries.
In 1314, at the age of 79 he himself undertook a missionary expedition to Africa. It was destined to be his last journey. While preaching the Faith of Christ in the public square at Bougie, a group of fanatical Mussulmans seized him and stoned him. He was bleeding from countless wounds and left for dead in the market place. Genoese merchants took him aboard their ship in order to give him burial in his own country. During the voyage Raymond regained consciousness for a time, but when the ship arrived near Mallorca, he breathed his last. 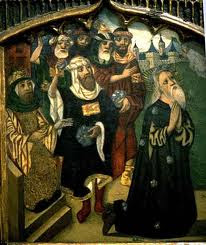 (Above, Bl. Raymond being stoned.)

A very great concourse of people gathered for his burial in the Franciscan church at Palma in Mallorca where he had joined the Third Order. Soon miracles were reported as occurring at the grave of the glorious martyr. Pope Leo X beatified him, and Mallorca chose him as its special patron.

ON THE GREAT VALUE OF CHRISTIAN FAITH

1. As soon as the eyes of Blessed Raymond were opened by the word of God and interior grace, he perceived that all material things are nothing when compared with the inestimable treasures of the Christian Faith. For 9 years he retired into solitude in order to make a thorough study of the Faith by reading religious books, by meditation and prayer, and he spent his great fortune, and even life itself, in order to bring this precious blessing to others. St. Augustine held the Faith in like regard when he said: "No amount of wealth, no treasure, no honor, no worldly advantage is greater than the Christian Faith." Faith alone teaches us the true value of things; for worldly knowledge is subject to error. Whatever the Christian Faith teaches is infallible truth, for "he believes in the Son of God, who has the testimony of God in himself" (1 John 5:10). This testimony alone indicates the true value of all that is material and eternal. He who judges these things in any other way is eternally deceived. -- Have you valued your Faith accordingly and revered it as a teacher?

2. Consider that the Christian Faith is also the greatest consolation in all our earthly sorrows. Here on earth it often happens, and God's wisdom often arranges it thus, that an honest and God-fearing Christian is visited with great troubles and difficulties and misfortunes, while unbelievers and the godless seem to fare well and everything they undertake seems to succeed. But if you are deeply imbued with the Christian Faith you will recognize in all the sorrow that comes your way the seeds of a rich harvest which awaits you in eternity. Filled with interior consolation, you will then say with the Apostles: "I know whom I have believed, and I am certain that He is able to keep that which I have committed unto Him, against that day" (2 Tim 1:2). If calumny and persecution come upon you, and it appears that the whole world has conspired against you, but you adhere firmly to the principles of the Christian Faith, you may say confidently: "This is the victory which overcomes the world, our faith (1 John 5:4). -- Thank God for the gift of the Christian Faith. Have you used it well in the time of sorrow?

3. If the Christian Faith is so inestimable a blessing, how concerned should we be to preserve it without stain and to strengthen it! Our Faith is weakened and often lost through association with unbelievers, through the reading of literature that is hostile to the Faith, through conceit and adverse criticism of the truths of our Faith. Be on your guard, therefore, to avoid these snares, and pray often and fervently that God may preserve the Faith in you and permit you to be more and more imbued with it.

O God, who didst adorn Blessed Raymond, Thy martyr, with zeal for the salvation of souls and the spread of the Gospel, grant us, Thy servants, that through his intercession and mediation we may faithfully preserve unto death which we have received in Thy grace. Through Christ our Lord. Amen.

Above from: The Franciscan Book of Saints, ed. by Marion Habig, ofm., © 1959 Franciscan Herald Press