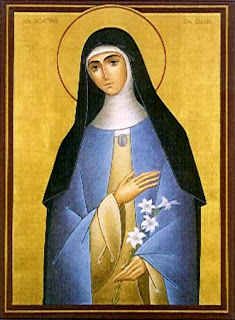 Beatrice was born of Portuguese parents at Ceuta on Moroccan soil, and manifested a special attachment to our Immaculate Mother very early in life. At the court of the king of Castile she was presented and cast into prison by a jealous queen, but by the visible intervention of the Immaculate Queen of heaven, she was released and justified with great honor. Then she left the court and went to Toledo. On the journey thither St. Francis and St. Anthony appeared to her and announced that she would be the founder of a new order.


At Toledo she repaired to a convent of Cistercian nuns and remained there for almost 40 years. She did not don the religious garb; nevertheless she was a model of religious perfection. Gradually the resolution took shape to establish a new order that would honor the Immaculate Mother of God. With 12 companions who entertained sentiments similar to hers, she withdrew to a separate house. Beatrice wrote the rule and asked Pope Innocent VIII to approve it. This occurred in the year 1489.

A few years earlier the Blessed Virgin has showed her in a vision that she should wear a habit consisting of a white tunic and scapular with a light blue mantle. This was the origin of the Order of the Immaculate Conception, also known as the Conceptionist Poor Clares.

The whole life of the foundress was conformed to her religious rule. The rule itself can be summed up briefly in three short mottos: to be silent and submissive in all things that happen to us by God's ordinance or are required of us by holy obedience; to become small in the eyes of God, of the world, and of ourself, and to prefer a life of obscurity; to love everyone with a holy love, and become all to all by prayer, sacrifice, and labor.

At the age of 65, Mother Beatrice departed form this life in 1490, a year after the founding of her order. Pope Pius XI enrolled her among the beatified. The Conceptionists were incorporated into the Franciscan Order and soon spread through Europe and America. Thanks to the efforts of the Franciscan bishop, Amandus Bahlmann of Santarem, a branch of this order, under the name of Missionaries of the Immaculate Conception, is doing remarkable work especially in the missions of Brazil. Their motherhouse is at Patterson, New Jersey.

ON THE VANITIES OF THE WORLD

1. Consider the danger to which the vanities of the world expose us. Honors and riches arouse the lower passions and tempt us to pride and forgetfulness of God. Blessed Beatrice was well advised when she rid herself of all vanities and chose a life of renunciation. The words of Holy Scripture can be applied to many who have indulged in worldly vanities: "As much as she has glorified herself, and lived in delicacies, so much torment and sorrow give to her" (Apoc 18:7). -- Do not let yourself be ensnared.

2. The vanities of the world are transient. It is written: "Favor is deceitful and beauty is vain" (Prov 31:30). What will be the end of all worldly vanities? "Of earth they were made and into earth they returned altogether" (Eccl 3:20). Therefore, the Wise Man says: "Why is earth and ashes proud? (Eccli 10:9). Blessed Beatrice acted wisely when she bade farewell to all vanities. -- Frequently recall the words the Church uses on Ash Wednesday: "Remember. O man, that you are dust and unto dust you shall return."

3. Consider that to devote oneself to the infinite Good is the best thing we can do. Blessed Beatrice did that. All for God, that was her maxim. She found in it interior peace and satisfaction, during her sojourn on earth, and in the next world the possession of the highest Good in eternal bliss. Thomas a Kempis is correct when he says "All is vanity but love God and serve Him alone." The Franciscan pope, Clement XIV, wrote at the time of his elevation to the cardinalate: "I count this dignity as an accumulation of letters of the alphabet for an epitaph that is of no use to him who lies beneath it."

Hear us, O God, source of all our blessings, that we who rejoice in celebrating the feast of Thy virgin Blessed Beatrice may be ennobled in sentiments and encouraged to loving submission. Through Christ our Lord. Amen.

from: The Franciscan Book of Saints, ed. by Marion Habig, ofm., © 1959 Franciscan Herald Press
Posted by Chiara at 11:11 PM No comments: