This prayer is prayed at all seven of the Divine Offices by Poor Clare Colettine nuns.  The prayer is from St. Francis.
Posted by Chiara at 9:30 AM No comments:

"Our Lord awaits us in the Eucharist. Let our praise and glory to the Blessed Sacrament never cease."
- Bl. Pope John Paul II

We adore you, Lord Jesus Christ,
here and in all your churches
throughout the world,
and we bless you,
because by your Holy Cross
you have redeemed the world.
Amen

All-powerful, all holy,
most high and
supreme God,
sovereign good,
all good, every good,
you who alone are good,
it is to you we must give
all praise, all glory,
all thanks, all honour,
all blessing;
to you we must refer all good always.
Amen
Posted by Chiara at 9:28 AM No comments:

A Little on St. Padre Pio 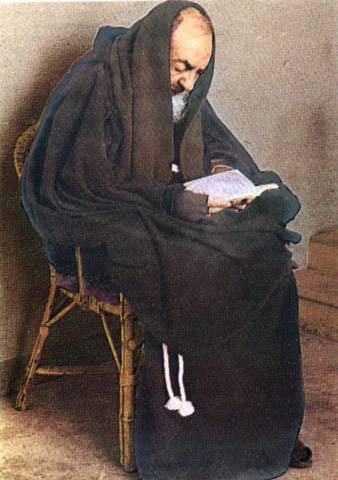 "In 1966, the Father General (of the Franciscans) came to Rome prior to the special Chapter on the Constitutions in order to ask Padre Pio for his prayers and benedictions. He met Padre Pio in the cloister. 'Padre, I came to recommend to your prayers the special chapter for the new Constitutions . . .' He had scarcely gotten the words 'special Chapter' . . . 'new Constitutions' out of his mouth when Padre Pio made a violent gesture and cried out: 'That is all nothing but destructive nonsense.' 'But Padre, after all, there is the younger generation to take into account . . . the youth evolve after their own fashion . . . there are new demands . . .' 'The only thing missing is mind and heart, that's all, understanding and love.' Then he proceeded to his cell, did a half-turn, and pointed his finger, saying: 'We must not denature ourselves, we must not denature ourselves! At the Lord's judgment, St. Francis will not recognize us as his sons!'"

A year later, the same scene was repeated for the aggiornamento of the Capuchins: "One day, some confreres were discussing with the Father Definiteur General (The counselors or advisers to the general or provincial of a religious order – Ed.) the problems in the Order, when Padre Pio, taking a shocked attitude, cried out, with a distant look in his eye: 'What in the world are you up to in Rome? What are you scheming? You even want to change the Rule of St. Francis!' The Definiteur replied: 'Padre, changes are being proposed because the youth don't want to have anything to do with the tonsure, the habit, bare feet' . . ."

Padre Pio replied: "Chase them out! Chase them out! What can you be saying? Is it they who are doing St. Francis a favor by taking the habit and following his way of life, or rather, isn't it St. Francis who is offering them a great gift?"
Posted by Chiara at 9:18 AM No comments: 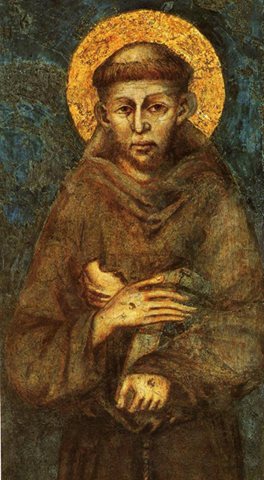 “While you are proclaiming peace with your lips, be careful to have it even more fully in your heart.”

Posted by Chiara at 9:15 AM No comments: