Today is the Feast of St. Agnes of Assisi, Virgin, Poor Clare and blood sister of St. Clare of Assisi 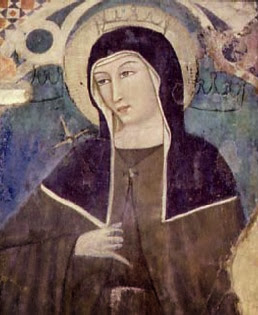 When St. Clare received the veil in 1212, she left behind her at home a young sister of 14 named Agnes. In answer to Clare's prayers and inspired by God, Agnes betook herself to the same convent where Clare was then staying only 16 days after her sister's departure from home.

Their father, much enraged, hastened to the convent in company with several relatives. He used force to remove her and was in the act of dragging her along by the hair, when Agnes suddenly became fixed to the spot. The united efforts of the entire company were powerless to move her. But he was seized with a violent pain in his arm and the weapon dropped from his hand. Overcome with fear, he and the rest of the band fled from the scene.

Agnes was overjoyed and returned to her sister Clare. St. Francis then led the two maidens to the convent of St. Damian, where he gave the holy habit also to Agnes. She now endeavored to imitate her saintly sister in everything, and devoted all her spare time to prayer and contemplation. She lived a very austere life, partaking only of bread and water, and wearing a coarse garb all her life.

St. Francis soon recognized the rich treasure of virtue hidden in this privileged soul. When a new convent of Poor Clares was to be founded at Florence in 1221, St. Francis sent Agnes, despite her youth, to act as superior there. Later he sent her also to Mantua and to several other cities in northern Italy to establish additional houses of the order. Wherever she went, she edified everybody by her holy life. Many devout young women renounced the world in order to consecrate themselves to God in monastic seclusion under her direction. She had the gift of infusing the Franciscan spirit into them, both by word and example.

She was favored with many extraordinary graces by God. In the great fervor of her devotion she was often raised above the earth, and once our Lord appeared to her in the form of an infant. From Holy Thursday until Holy Saturday she was once so rapt in the contemplation of the sufferings of Christ that she was under the impression she had spent an hour in this mystical state.

When St. Clare was about to die, she sent for Agnes to assist her in her final days. In her last moments Clare addressed her sister in these words, "My beloved sister, it is the will of God that I go, but be comforted, you will soon come and rejoin me with our Lord." Three months later Agnes followed her sister to eternity. It was on November 16, 1253. Her body rests in Assisi in a side chapel of the church of St. Clare. Numerous miracles occurred at her tomb, and Pope Benedict XIV canonized her.

ON THE FRANCISCAN SPIRIT

1. On the feast of St. Agnes, Holy Church has us pray for the seraphic or Franciscan spirit. In what does that spirit consist? The seraphic spirit consists in ardent holy love, in a heart which seeks and sees God in all things and is bent on spending itself for His honor and using all things to glorify Him. The seraphic spirit takes its name from the Seraphim, who are ever aflame with love for God. Our seraphic father St. Francis was all aglow with this love of God and, like the three young men in the fiery furnace, wished all creatures to join in praising God. St. Agnes was at times so inflamed with this love that she was bodily raised above the earth. This love of God is conspicuous in all the saints of the Franciscan Order, for which reason the order itself is often spoken of as the Seraphic Order. As in the material world everything is attracted to the sun and revolves around it, so should all rational creatures be drawn to God and all the desires of their hearts should tend towards Him. -- Do you possess this seraphic spirit?

2. Consider the obstacles that oppose this seraphic spirit in the heart of man. There is, above all, worldliness which makes us so attached to material goods, sensual pleasures, and earthly honors, and thus hinders us from rising to God. Christ spoke thus to the Jews: "You are from beneath -- that is, earthly-minded -- I am from above" (John 8:23). That is the reason, said He, why they could not come to Him, and would die in their sins. Sins for which atonement has not yet been made also stand in the way and prevent the flame of love from rising upwards. Finally, conceit and pride hold many people captive. Such pride cast Lucifer out of heaven, and it permits no human heart to ride to God. Therefore, detachment from material things, penance for sins committed, and sentiments of humility must prepare our hearts, otherwise they will not be in a condition to receive so much as a spark of true divine love. -- What is it that prevents you from truly loving God?

3. Consider that this fire of love, which fills the heart with the seraphic spirit, must come from the Father of Light. What we can do, is make ourselves receptive for this grace. But, if we do our part, God will give it to us, for He said; "I am come to cast fire on the earth, and what will I but that it be kindled?" (Luke 12:49). Let us, therefore, pray for the seraphic spirit and do what lies in us that it may not be weakened or stifled in us. Then, too, let us be mindful, especially during the month which is devoted to the souls in purgatory, of these souls who are filled with the seraphic spirit but suffer great anguish in their desire for God. Let us pray that God may satisfy their ardent longing.


PRAYER OF THE CHURCH

O Lord Jesus Christ, who didst set up Blessed Agnes before many virgins as a model and guide to evangelical perfection, grant, we beseech Thee, that the seraphic spirit, which she so wisely taught and confirmed by her holy example, may be preserved in us from all taint. Who livest and reignest forever and ever. Amen.