Today is the Feast of Saints Nicholas Tavelic, Stephen of Cuneo, Deodato Aribert from Ruticinio and Peter of Narbonne Franciscan Priests, Martyrs 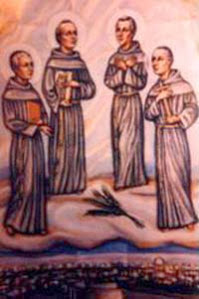 
Roman Martyrology: In Jerusalem, the Holy Nicholas Tavelic, Deodato Aribert, Stephen of Cuneo and Peter of Narbonne, Priests of the Order of Friars Minor and Martyrs who were burned in the fire for preaching boldly in the public square in front of the Saracens, the Christian religion, professing Strongly Christ Son of God.

The personal stories of these Franciscan missionaries, are intertwined in 1383, when, coming from different places in Europe, they flowed into the Franciscan convent of Mount Zion in Palestine, where the Order of St. Francis has been for centuries the Custodian of the Holy Places of Christianity.

The Friars Minor, Nicholas Tavelic, Deodato by Aribert Ruticinio, Stephen of Cuneo and Peter of Narbonne found themselves in that Franciscan monastery, where they lived for eight years, according to the Rule of St. Francis, performing their duties, for the care of Places sanctity of life and death of Jesus, and trying to do apostolate in the Muslim world, where Mount Zion was almost like an island amid a sea of Muslims.
With Muslims, the apostolate was almost fruitless, since the deepening of their faith, they were not open to interreligious dialogue.

Nevertheless, the four Friars Minor, decided to bring the Gospel to the Mohammedans, publicly exposing the arguments of Christianity and Islam and comparing them with those after consultation with two theologians, prepared a memorandum in which, in a detailed and rich in historical references and theological, meticulously exposed the Christian doctrine by refuting Islam.
On November 11, 1391, they went before the Cadi (judge) of Jerusalem in the presence of many Muslims, they were exposed reading this, they worked out with great courage. While they listened carefully, it was not accepted by those present, in the end they went into a rage and then the monks were asked to recall what they said; the four monks refused and so were sentenced to death for three days were put behind bars where they suffered abuse.

On November 14, they were brought back to the streets, again asked to recant what was said against Islam, after rejection this they were killed, blown to pieces and burned, the Muslims did disappear any remains, even the ashes, so that they were not honored by Christians.

Their martyrdom was described in detail in a report by the Guardian of the Holy Land, Father Gerald Calvet, two months after their death.
Their Cult was recognized by the Franciscan Order, dating from the fifteenth century; Pope Leo XIII, in 1889, confirmed only the cult of Nicholas Tavelic, the leader, who had great reverence in his native Yugoslavia.

Pope Paul VI, on June 21, 1970, in Rome, elevated them to the altars, proclaimed them saints, and their liturgical celebration was extended to November 14 for all, and inserted into the Roman Martyrology on the same date; they are the first martyrs and saints the Custody of the Holy Land.

First saint of the Croatian nation, Nicola Tavelic, was born about 1340 in Šibenik, Dalmatia; as a teenager he walked among the Friars Minor of St. Francis, became a priest, was a missionary in Bosnia, along with his father by Deodato Ruticinio, where for nearly 12 years he preached against the Bogomil, a heretical sect that had its stronghold in Bosnia (they contrasted the spirit world than that of matter, considered an expression of force of evil, they denied the Trinity, the human nature of Christ, the Old Testament, did not recognize the rites and sacraments of baptism and marriage, nor the church hierarchy).

Then in 1383, along with the French father of Aribert Ruticinio Deodato, he was sent to the Mission of Palestine Mont Sion in Jerusalem, where he met the other two future fellow martyrs, Father Stephen of Cuneo and Father Peter Narbonne, France.

Was from the Franciscan Province of Aquitaine. We do not know his date of birth, which was probably around 1340. His country of birth, which in Latin is called Ruticinio was identified by some with the modern French city of Rodez, while some other shows the Roussillon, the historical region of southern France, but at that time depended on Catalonia. In 1372 he was sent as a missionary in Bosnia, where he met Father Nicola Tavelic, to whom he was bound by sincere friendship, all preaching against the Bogomil; in 1383 with his brother he was assigned to the Franciscan convent of Mount Zion in Jerusalem, where he also met the Fathers by Stefano Cuneo and Peter of Narbonne outfit.

All that is known of this Franciscan Martyr from the Franciscan Province of Provence in southern France, where at one point,he went down into Italy, attracted by the Franciscan Observance Reform, launched in Umbria in 1368, by Blessed Paul or Paoluccio Trinci of Foligno (1309-1391). He was at the hermitage Umbrian Brogliano, located between Foligno and Camerino, fifteen years, living in prayer and meditation on the spirituality of St. Francis. In 1381 he left as a missionary to the Holy Land, received into the convent of Mount Zion in Jerusalem where he met Nicola Tavelic in 1383, Deodato from Ruticinio, his compatriot and Stephen of Cuneo, with whom he will later be martyred so horribly, on November 14, 1391.

Very little is known about the Franciscan Saint Martyred in Jerusalem, Stephen of Cuneo, made from precious ‘report’ made by the Father Superior of the convent of Mount Sion, on the martyrdom of the four priests belonging to the convent of the Custody of the Holy Land. Father Stephen of Cuneo, was of the Franciscan Province of Genoa and spent eight years in the vicarious in Corsica, before being transferred to Jerusalem in 1383, where he could fulfill his apostolic activity among the Muslims for another eight years before his martyrdom, suffered along with fellow French by Deodato Ruticinio and Peter of Narbonne and the Croatian Nicola Tavelic. The city of origin of the Franciscan saint, Cuneo, seems doubtful, since an historic renaissance, claimed to have collected a local tradition, which made him a native of Fiumorbo in Corsica, with a separate family Prunelli.

Be well, but the martyr is well known for 600 years as Stephen of Cuneo.

When Nicholas finished his studies, a bright future smiled upon him. Everything the world could give was at his command and awaited his pleasure. However, he resolved to quit the world and enter the Order of St. Francis. In spite of the great obstacles and the stubborn opposition he met, he received the humble habit of St. Francis and made his novitiate with the simplicity and docility of a child.

Manual labor, study, power, and mortification were his delight and chief employment. After he was ordained a priest, his fervor in saying Mass caused edification and all were impressed by his sermons.

Due to his great learning and piety, he was sent as a missionary to Bosnia, a most difficult field of labor. Undaunted, Nicholas labored with ardent zeal among the heretics. refuting their false doctrines, repaying insult with blessing, visiting the sick, comforting the afflicted. He gained innumerable souls for Christ by his extreme kindness and charity.

Many esteemed him another Christ, while others persecuted him with relentless hatred. At heart he loved the latter more, for he desired martyrdom and thought they might procure for him the coveted crown. This thought gave him tremendous supernatural strength. It increased his charity and zeal, his spirit of prayer, meditation and penance. But, after 12 years of tireless labor in Bosnia, all opposition died down, and Nicholas was convinced he must seek martyrdom elsewhere.

He now asked for permission to go to the Holy Land, where so many of his brethren had already attained the martyr's crown. The permission was granted to him, and he was sent to Jerusalem. Once more he led a hidden life of prayer, penance, and study, but more than ever he yearned to die the death of a martyr, desiring, like Christ, to be an oblation of love for the salvation of others.

On November 11, 1391, he entered the Turkish mosque and with the zeal of a Saint Paul preached to a vast assembly there. He pleaded with tact and eloquence that Christ and His religion be accepted by the Turks in their hearts and homes. Before he had finished, he was apprehended and taken to the magistrates.

Questioned as to his faith, Nicholas joyfully professed his belief in the one true Church of Christ, defending it against every objection. This incensed the court to such an extent that he was knocked to the ground and attacked with great fury. Beaten almost to death, he was dragged into a dungeon, chained hand and foot, and kept for three days without food or drink.

On the fourth day he was taken out into the street, where he died the glorious death of a martyr, slashed to pieces with scimitars. God glorified His martyr by miracles, and Pope Leo XIII solemnly confirmed the veneration paid to him from time immemorial.

1. Eternal goods should be treasured above all things. Reflecting on the permanence of heavenly goods, Blessed Nicholas left everything the world offered him and became a poor Franciscan. He followed the admonition of our Lord: "Lay not up to yourselves treasures on earth, where the rust and the moth consume, and where thieves break through and steal. But lay up to yourselves treasures in heaven, where neither the rust nor the moth consume, and where thieves do not break through nor steal" (Matt 6:19-20). -- Which treasures do you seek to acquire?

2. Eternal goods are not properly evaluated. Most people are bent on acquiring temporal goods, money, possessions, distinctions, honor, and pleasure. They put themselves to much trouble by day and by night to acquire them. How many there are who ignore the goods of eternity for the sake of some temporal benefit, a momentary pleasure! The words of our Lord are directed to them: "I have sworn in My wrath! They shall not enter into My rest" (Heb 3:11). -- Which goods are you trying to acquire?

3. Temporal goods are quite worthless. They are transient and cannot satisfy the heart of man. Solomon reveled in worldly luxury, and in the end he was forced to admit: "I was weary of my life when I saw that all things under the sun are evil, and all vanity and vexation of spirit" (Eccl 2:17). -- Do you permit yourself to be dazzled by the things of this world?

O God, who didst glorify Thy confessor Blessed Nicholas by spreading the Gospel and by the palm of martyrdom, grant in answer to our prayer, that we may merit to walk in his footsteps and through his intercession deserve to receive the victor's reward of eternal life. Through Christ our Lord. Amen.

from: The Franciscan Book of Saints, ed. by Marion Habig, ofm., © 1959 Franciscan Herald Press
Posted by Chiara at 10:13 PM No comments: