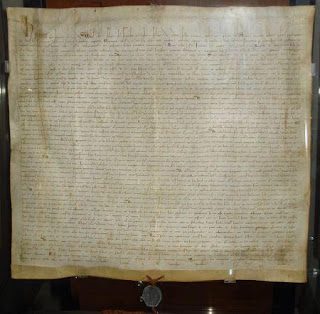 (Photo of the actual Original Rule of the Third Order dated 1221 A.D. and stored in the Vatican)

While visiting Bologna, Brother Bernard put his hand in his bosom and brought out the Rule of St. Francis, which he bore in his heart and practised in his deeds, and gave it to a learned judge to read.

And when that judge had read it through, reflecting on its lofty state of perfection, he was utterly amazed, for he was an intelligent man. And turning to his companions, he said with the greatest surprise and admiration: "This certainly is the highest form of religious life I have ever heard of! And therefore this man and his companions are some of the holiest men in the world. So those who insult him are committing a very great sin, for he should be given the highest honors rather than insults, as he is a great and true friend of God!"

- Little Flowers of St. Francis
Posted by Chiara at 11:51 AM No comments: