"A Right To Be Merry" by Mother M. Francis, Poor Clare Colettine nun

This book, "A Right To Be Merry" is available at Ignatius Press: http://www.ignatius.com/Products/RTBM-E/a-right-to-be-merry.aspx.

For anyone who loves the Poor Clare Colettines, whether you have a vocation to them or not!, loves St. Clare, you must read this book!  It is written by Mother Mary Francis, PCC, formerly the Mother Abbess of the Roswell PCC community (http://www.poorclaresroswell.com/index.html).  She passed away a few years ago.

I love this book!  I have read this book only about 5 times!  I must buy a new one as my original one is falling apart, dog-eared, highlighted and underlined to death!  This book since it was first printed - in the 40's or 50's? forget now, has led to countless vocations to the Poor Clare Colettines.

This is the perfect book to give to young girls who are thinking of a vocation or not - it may MAKE them think of one!  It's also a great read for anyone to understand the Poor Clare Colettines better.  It explains the many "why's" people have of religious life and especially the enclosed monastic life, the vows, and Franciscan/PCC way of life: the bare feet, poverty, rising at midnight, their rule of life, the vows of obedience, poverty, chastity and enclosure, etc.  Often it's funny, serious and just a gem!

Mother Mary Francis has written several other books on poems, God, religious life, etc http://www.ignatius.com/Products/CategoryCenter.aspx?SearchTerm=mother+mary+francis).  She also wrote a sequel to this book about their founding the PCCs in Eindhoven in the Nederlands (http://web.inter.nl.net/users/clarissenklooster/), called "Forth and Abroad".  Here is a video on the Eindhoven PCCs:

Posted by Chiara at 6:40 PM No comments:

Great Movies on St. Francis and St. Clare of Assisi

These movies are also available at Amazon.  To give support to a great Catholic company, below are the links to Ignatius Press' site for these movies:


Both movies are very good - fairly accurate - but people who know the lives of these saints will see differences or some inaccuracies.  I.E. in "Saint Franics", they have the two saints about the same age and playing together as children when in reality, St. Francis was 12 years older than St. Clare and they have Clare staying in a Benedictine monastery instead of her founding the Poor Ladies (as they were called then) in the church, San Damiano, that St. Francis rebuilt, etc.  But over all these are good movies.
Posted by Chiara at 6:09 PM No comments:

St. Anthony of Padua, "Hammer of the Heretics" 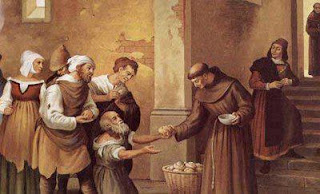 St. Anthony (also known as Antony) is a Doctor of the Church, a Franciscan priest called the "Hammer of the Heretics", the "Wonder Worker", and the "Living Ark of the Covenant."

He was born Fernando Martin de Bulhom in 1195 in Lisbon, Portugal, t...
he son of a knight of the court of King Alfonso II. His parents sent him to be educated by the clergy at the Cathedral of Lisbon. At the age of 15 he joined the Canons Regular of St. Augustine and at 17, in order to have more seclusion, asked for and obtained leave to transfer to the priory of St. Cross, of the same order, at Coimbra, then the capital of Portugal. There, for a period of eight years, he devoted himself to study and prayer. With the help of a remarkable memory, he acquired a thorough knowledge of the Scriptures.

The arrival of the relics of St. Bernard and companions, the first martyrs of the Franciscan Order, led Anthony to join the Franciscan Order at the age of 25. At this time, he changed his name to Antony in honor of St. Antony of Eygpt, which was the name of the chapel where he received the Franciscan habit. He was deeply inspired by the Franciscan martyrs and tried to emulate them. He received a friendly reception at the peaceful little Franciscan convent at Coimbra and in the same year his earnest wish to be sent to the missions in Africa was fulfilled.

But God had decreed otherwise. And so, Antony scarcely set foot on African soil when he gravely ill. Even after he had recovered, he was so weak that he boarded a boat back to Portugal. Unexpectedly, a storm came upon them and drove the ship to the east where it found refuge on coast of Sicily. There Antony was greeted and given shelter by the Franciscans of that island, and shortly thereafter was sent to Assisi, where the general chapter of the Order was held in May, 1221 A. D. Antony remained there nine months as chaplain to the hermits, occupied in the lowliest duties of the kitchen and convent, and to his heart's content he practiced interior as well as exterior mortification.

But the hidden jewel was soon to appear in all its brilliance. For the occasion of a ceremony of ordination some of the hermits along with Antony were sent to the town of Forli. Before the ceremony was to begin, however, it was announced that the priest who was to give the sermon had fallen sick. The local superior, to avoid the embarrassment of the moment, quickly asked the friars in attendance to volunteer. Each excused himself, saying that he was not prepared, until finally, Antony was asked to give it. When he too, excused himself in a most humble manner, his superior ordered him by virtue of the vow of obedience to give the sermon. Antony began to speak in a very quiet and reserved manner; but soon the power of the Holy Spirit seized him, and he spoke with such eloquence that everyone was amazed.

When St. Francis was informed of the event, he gave Anthony the mission to preach throughout Italy. At the request of the brethren, Antony was later commissioned also to teach theology, "but in such a manner," St. Francis distinctly wrote, " that the spirit of prayer be not extinguished either in yourself or in the other brethren." Antony himself placed greater value in the salvation of souls than on learning. For that reason he never ceased to exercise his office as preacher despite his work of teaching.

Antony was called the "Wonder Worker for his many reported miracles. He preached to crowds in the rain, but his audiences remained dry despite the downpour.

The number of those who came to hear him was sometimes so great that no church was large enough to accommodate and so he had to preach in the open air. He was so energetic in defending the truths of the Catholic Faith that many heretics returned to the Church. This occasioned the epitaph given him by Pope Gregory IX "the ark of the covenant."

In all his labors he never forgot the admonition of his spiritual father, St. Francis, that the spirit of prayer must not be extinguished. If he spent the day in teaching and heard the confession of sinners till late in the evening, then many hours of the night were spent in intimate union with God.

Once a man, at whose home Antony was spending the night, came upon the saint and found him holding in his arms the Child Jesus, unspeakably beautiful and surrounded with heavenly light. For this reason St. Anthony is often depicted holding the Child Jesus.

In 1227 A. D., Antony was elected Minister Provincial of the friars living in northern Italy. Due to his taxing labors and his austere penance, he soon felt his strength so spent that he prepared himself for death. After receiving the last sacraments he kept looking upward with a smile. When he was asked what he saw there, he answered: "I see my Lord." He breathed forth his soul on June 13, 1231 A. D., at the age of 36. Soon the children in the streets of the city of Padua were crying: "The saint is dead, Antony is dead."

Antony was canonized in 1232 and named a Doctor of the Church in 1946. At Padua, a magnificent basilica was built in his honor, his holy relics were entombed there in 1263 A. D. From the time of his death up to the present day, countless miracles have occurred through St. Anthony's intercession.

Alms given to obtain his intercession are called "St. Antony's Bread."

How he came to be invoked, as he now is, of the finder of lost articles has never been satisfactorily explained. The only story that relates to this is contained in the so-called Chronicles of the Twenty-Four Generals, number 21. A novice ran away from his monastery carrying with him a valuable psalter which Antony had been using. he prayed for its recovery and the novice was frightened by a startling apparition into returning it. 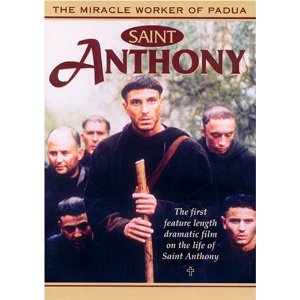 And at Ignatius Press: http://www.ignatius.com/Products/STA-M/saint-anthony.aspx