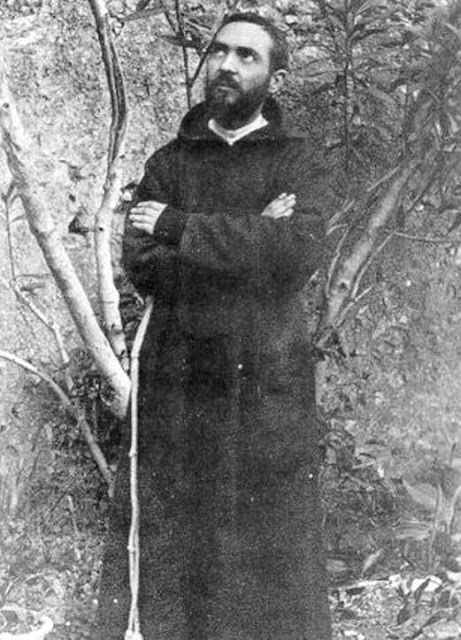 "Detach yourself from the world. Listen to me. One person drowns on the high seas, another chokes on a glass of water. What difference there between these two; are they not both dead?"

From a Facebook page for the sisters, a beautiful picture:

Photos from a PCC vocation booklet

Photos scanned from a Poor Clare Colettine vocation booklet for discernment.  The pictures are actually from different PCC communities: 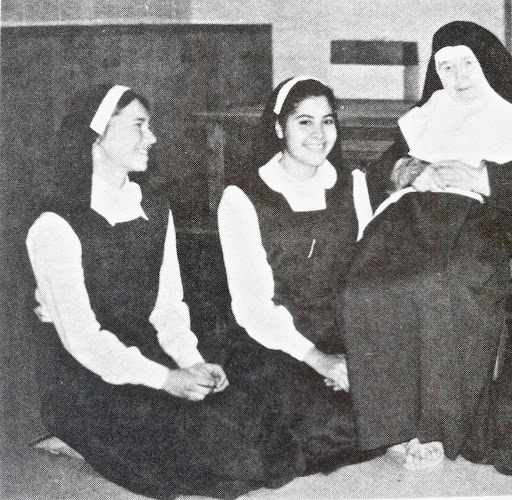 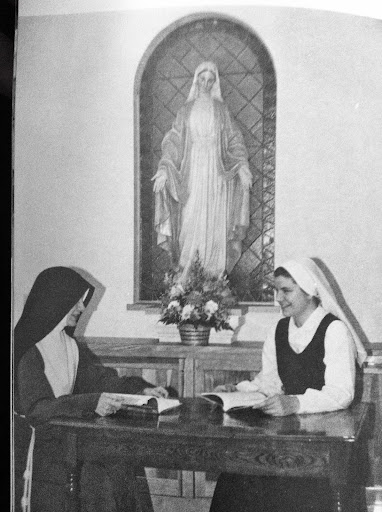 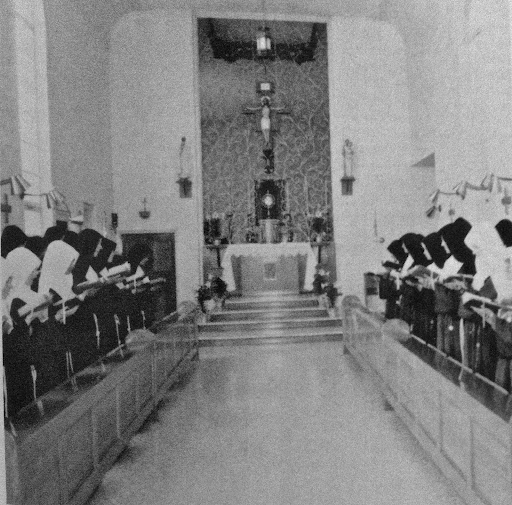 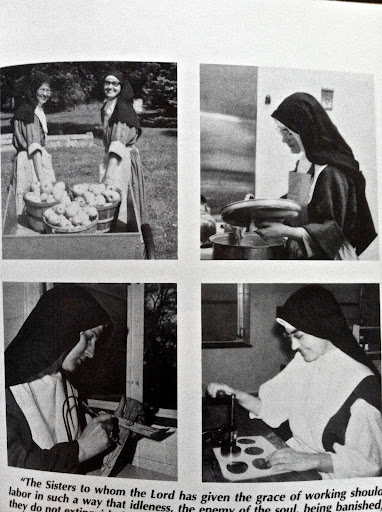 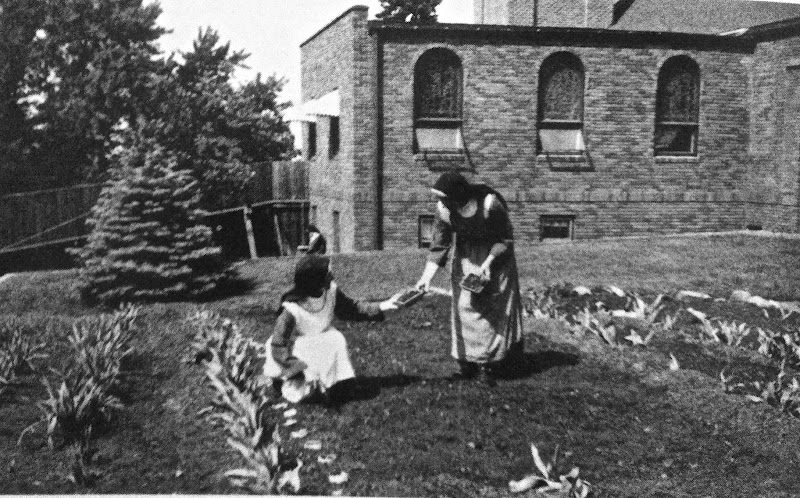 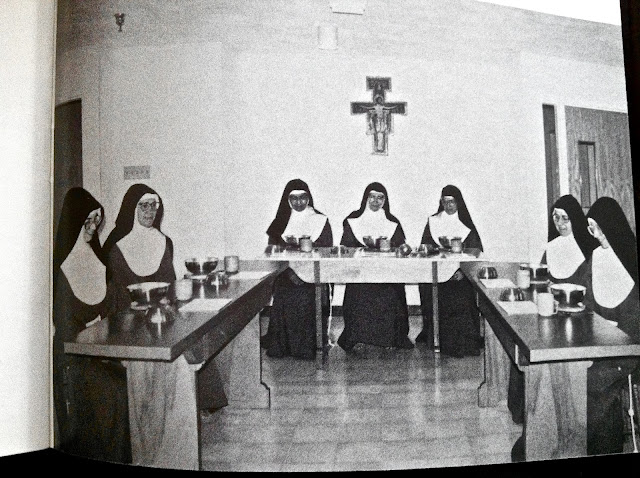 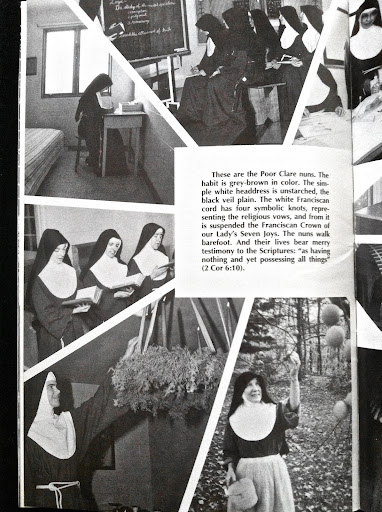 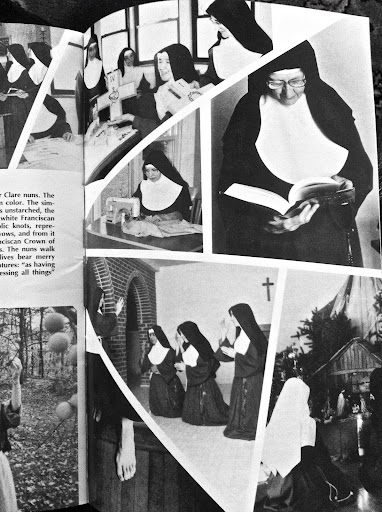 They carry on 800 years of prayer and work

Poor Clare sisters at the Monastery of the Immaculate Conception in Palos Park prepare the altar on March 18 for a Mass with Cardinal George celebrating the 800th anniversary of their order. Karen Callaway/Catholic New World

By Joyce Duriga
EDITOR
Six women living a life of simple poverty in an enclosed world inside Immaculate Conception Monastery in Palos Park are part of an 800 year-old religious community dedicated to prayer and penance. They are Poor Clare sisters and on March 18 they celebrated their anniversary during a Mass with Cardinal George.
The order was founded in Assisi, Italy, in 1212 when a young woman named Clare left her wealthy family to begin a community of religious women under the guidance of St. Francis.
At the time of St. Clare’s death, 50 communities were in place in the Franciscan tradition of the Poor Ladies, as they were then called.
The women take vows of poverty, chastity, obedience and enclosure living in a cloister and shutting themselves off from the rest of the world to live a life of prayer and work.
“Enclosure is a way of living Sabbath permanently,” Cardinal George explained in his homily during the March 18 Mass. On the Sabbath, Christians take the time to be quiet and listen to God.
“The life of the Poor Clares is not just a life marked by enclosure. Most especially it is marked by contemplation,” he said, to seek and understand what God is saying. In a particular way, the Poor Clares contemplate Christ crucified, to whom they are espoused.
“In that image of a crucified Lord we find eternal life,” the cardinal said.
Through their life of voluntary poverty, the Poor Clares “clear the mirror” from distractions so they might see Christ crucified all the better, he said.
The Poor Clares came to Chicago in 1893 residing in a monastery on Laflin Street. In the 1960s they moved to a location in Hickory Hills. However, in 1992 the monastery closed because of dwindling numbers and the remaining sisters moved to a monastery in Roswell, N.M.
In 1999, Cardinal George travelled to Roswell and asked that the Chicago monastery be restored. The sisters agreed and they returned to the area and took up temporary lodging in a convent on the grounds of St. Symphorosa Parish, 6135 S. Austin Ave., until their new monastery in Palos Park was completed. The cardinal dedicated the new Immaculate Conception monastery in 2003.
The sisters wear full habits, which they make themselves, and go barefoot in a spirit of poverty. They have a garden where they grow their own food and they also rely on the aid and generosity of friends and benefactors to obtain other food staples and support.
Once a sister enters the monastery she normally stays in that same place for the remainder of her life — except for medical purposes or if she is asked to help start a monastery in another location.
“The whole of our life is dedicated to God. It’s all consecrated to him,” said Poor Clare Mother Teresita, the monastery’s abbess. “But then we do our daily work, keep the monastery going, and then we go to prayer. It’s a life of prayer and work.”
They spend time in prayer before the Blessed Sacrament praying on behalf of the needs of the archdiocese, the church universal and any special intentions given to them.
Mother Teresita, who was interviewed through a screen at the monastery, said the sisters are praying for eight new vocations to their monastery to coincide with their 800th anniversary — and for more to join their community around the world. March 18 is not the end of the celebration. The sisters will also note the anniversary on St. Clare’s feast day, Aug. 11.
The Poor Clares’ 800th anniversary is an affirmation of faith and St. Clare’s calling, Mother Teresita said.
“This was one young girl, 800 years ago, she went out in pure faith to the man that people thought was crazy — this Francis di Bernardone,” Mother Terista said. “She went out to join him but she had no clue who was going to come to join her.”
The number of Clare’s sisters grew, through the grace of God, and for eight centuries has born a radical witness to the Father’s love.
“Not everyone is called to live like we are but everyone is called to give God the primacy of their lives. So that’s what our life says,” Mother Teresita said. What else does this anniversary affirm for the Poor Clares?
“And also, God is enough,” Mother Teresita said. “We really don’t need anything else.
The public can join the community for Mass daily at 7 a.m. The sisters also accept prayer intentions. To learn more, visit www.chicagopoorclares.org.
Posted by Chiara at 10:59 PM No comments:

http://voxfeminaesacra.blogspot.com/2011/04/poor-clare-recordings-roswell-nm.html
Posted by Chiara at 10:58 PM No comments:

"Walls Around the World" by the Roswell PCCs

The Los Altos Clares here: http://poorclares.wo...clare-vocation/ have some really lovely drawings that were done by the Roswell PCCs but are not on their website. They are in the booklet Walls Around the World by the Roswell PCCs, which includes tidbits from conferences on enclosure by Mother Mary Francis, PCC, former Abbess (and Author of "The Right to Be Merry") of the Roswell PCCs. Below is the cover and some of the drawings.  For the whole scanned book go to this link - https://picasaweb.google.com/113228112367147112557/September272012

(from a friend who entered the PCCs)
Posted by Chiara at 10:53 PM No comments:

Let Us Climb the Mountain of the Lord

25]The mountains proclaim the glory of God! Throughout the ages their beauty and majesty have lifted man's heart to God and called him upward to a place of sacred encounter. It was on the mountain called Horeb that the Lord spoke to Moses from the burning bush and to the prophet Elijah in a tiny, whispering sound. The Son of God Himself, when He walked our earth, sought the heights of the mountains to pray to His Father. Mount La Verna witnessed the divine encounter that left our seraphic Father St. Francis with wounds of love in hands and feet and side.

We, too, are called to the heights. The whole of our blessed vocation is a summons from the Bridegroom, "Come, let us climb the mountain of the Lord!" (Is. 2:3) Set forth on a journey that will last a lifetime, this Franciscan adventure of love! To go up the mountain, we must first leave the comforts of the valley, and fly from all that will keep us from the heights. Thus we give clear witness that man belongs entirely to God, and so keep green among the human family the desire for a heavenly home (cf. Gaudium et Spes, # 38). Our life says to the world, "There's something up there!"


25]We take the sturdy staff of obedience to guide us on the direct path to the summit, for there is no shorter way nor one which leads more directly to heaven than to renounce one's own will for God's love (cf. Testament of St. Colette). The Lady, holy Poverty, lightens our journey. Like our sisters the larks, we entrust ourselves entirely to the providence of the heavenly Father, and know the joy and lightness of heart that spring from a genuine and effective poverty (cf. Constitutions of the Poor Clare Federation of Mary Immaculate in the United States of America).


125]The precious gift of God that is radiant chastity infuses into our hearts an unparalleled freedom to love. It binds us to Christ and also to our community with a unique and stable bond (ibid.). This sisterly charity helps us keep our footing in the narrow passes on rocky ways.


125]As we climb, our gaze encompasses the whole world, gathering the needs of the souls of men into the embrace of sacrificial love (ibid.). We set our journey to a song, the psalms and hymns that many travellers have sung before us as they made the ascent. The Virgin Mary illumines our way as Mother and guide, and every path she travels is made safe and joyful.


25] Everything on this mountain is worthy of wonder; but the greatest wonder is the wonder of Jesus, walking with us, present to us in the Holy Eucharist as companion on our journey.

25]Our life of spousal love is this daily ascent toward the summit, that eternal wedding feast with the King. "Blessed are those called to the wedding feast of the Lamb" (Rev. 19:9). This is the ultimate beatitude. This is our hope and our whole desire.