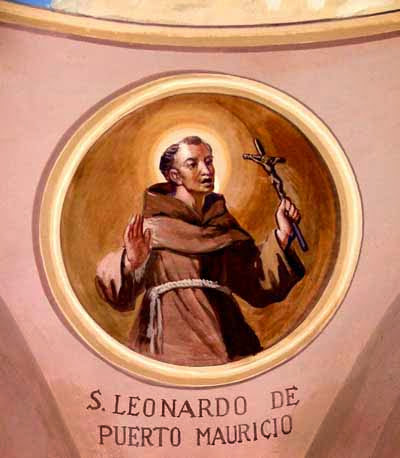 It is this saint to whom we owe the credit for having conceived the Via Crucis. Ligure (1676-1751), was the son of a sea captain. Born in Porto Maurizio, Imperia today, he studied in Rome at the Collegio Romano, then entered the retirement of St. Bonaventure, on the Palatine Hill, where he would wear the Franciscan habit. Posted in Corsica by the Pope to restore harmony among the citizens, he was able to obtain, despite the serious divisions among the inhabitants, an unthinkable embrace. The theme of the Cross was at the center of his preaching drew crowds to repentance and Christian piety. Alfonso Maria de Liguori called him “the greatest missionary of our century.”

Roman Martyrology: In Rome in the convent of Saint Bonaventura on the Palatine Hill, St. Leonard of Port Maurice, Priest of the Order of Friars Minor, who, full of love for souls, engaged all his life in preaching, in publishing books of devotion and to visit in over three hundred missions in Rome, Corsica and Northern Italy.

Young Franciscan Leonardo had asked to be a missionary in China. Cardinal Colloredo had replied: “Your China will be Italy.”

And at the end of the seventeenth century, Italy had enough misery and misfortune enough to be considered mission territory.

Leonardo was a student in Rome, when a friend suggested going to hear a sermon. A few steps, they found that a hanged man dangling from the gallows. “This is the sermon,” said the two young men.

A few days later, the son of a sea captain of Porto Maurizio, Liguria, followed by two figures of monks who climbed to the convent of San Bonaventura on the Palatine Hill, where he donned the habit of the Franciscans called “the riformella” or “displaced”.

Devoting himself to preaching, perhaps remembering that torture hanging from the gallows, including Leonardo was always in mind the other execution, hanging on the Cross. Therefore, his favorite theme was that of the Via Crucis, typically Franciscan devotion to which he gave the largest spread.

His preaching had something dramatic and tragic, often by torchlight and voluntary torture, which underwent between Leonardo, now placing his hand on the torch lit, now scourging blood.

Immense crowds flocked to hear him and be impressed by his fiery speech, which re-called to repentance and Christian piety. “He is the greatest missionary of our century,”said St. Alphonsus de Liguori. Often, the entire audience, during his sermons, burst into sobs.

He preached throughout Italy, but the region of Tuscany was beaten because of the cold Jansenism, he wanted to fight first of all with the fervor of his heart, then with his themes more effective, namely the Name of Jesus, the Madonna and the Via Crucis.

In a visit to Corsica, the island’s troubled robbers fired their muskets into the air, shouting: “Viva friar Leonardo, long live peace.”

Back in Liguria, was launching a galley, named in his honor, San Leonardo. But he was gravely ill, the sailors said: “The boat is water.”

Consumed by the missionary labors, he was finally recalled to Rome, where, with his impassioned sermons, which also assisted the Pope, he prepared the spiritual climate for the Jubilee of 1750. On that occasion, he planted the Via Crucis at the Colosseum, declaring that place sacred to the martyrs.

Historians have also demonstrated that the Colosseum was never martyred Christians, but the preaching ~ in good faith – of San Leonardo prevented the further destruction of the monument, hitherto regarded as a quarry of good stone.

It was his last effort. He died the following year, and San Bonaventura al Palatino it took the soldiers to hold back the crowd who wanted to see the Holy priest and take away his relics. “We lose a friend on earth – the Pope Lambertini said – but we gain a protector in heaven.”

It was he who suggested the definition of the Marian dogma of the Immaculate Conception, through consultation letters with all the pastors of the Church.