For the Feast of St. John of Capistrano's today

St John Capistrano was known as the defender of the rights of God preaching throughout Europe and fought many heresies and led the Christians troops against the invading Muslims. Ave Maria! 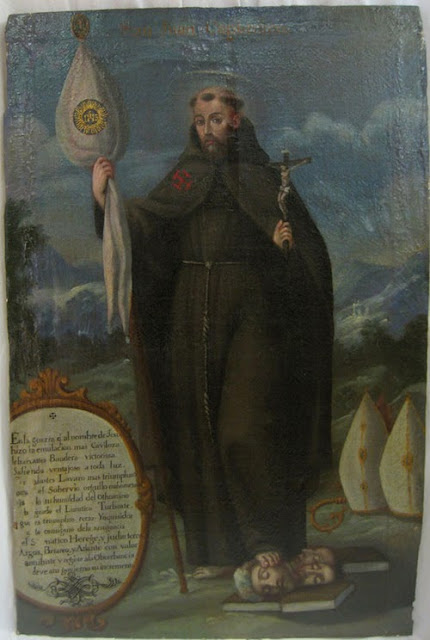 Today, October 23, we celebrate the feast day of Saint John of Capistrano (1386-1456), “the Soldier Saint,” confessor, acclaimed preacher, miracle worker, and crusader. Saint John lived at a time of difficulty and despair across Europe, having just suffered the plague, currently embattled in several wars, and attacks from Muslim forces of the East. Similarly, the Church was embroiled in battles regarding the identity of the pope (as schisms had created three separate individuals identified as pope), and the Franciscan Order was similarly divided. Saint John was a man of hope and action. His deep Christian optimism and complete faith in the Lord drove him to attack problems at all levels with the confidence engendered by trust in Christ.

John was born at Capistrano in the Italian Province of the Abruzzi. His father, who died while John was quite young, had been a well-respected German knight. John received a thorough education, seen to by his mother. As a student, John excelled, leading to immediate career successes. He became a lawyer and was granted the position of governor of Perugia at the young age of 26. He fought corruption and bribery and became renowned for his high ethical standards and commitment to justice.

When war broke out between Perugia and Malatesta in 1416, John tried to broker peace between the regions. Unfortunately, his efforts led only to his imprisonment. During his time in prison, while he had plenty of time for contemplation, John felt a deep spiritual stirring within in, vowing to change his life for the better upon his release. Shortly thereafter, following the death of his wife, he entered the order of Friars Minor, was ordained a priest, and began to lead a very penitential life.

John became a disciple of Saint Bernadine of Siena and was immediately recognized for his sermons and ability to touch the hearts of those who listened to him. As an Itinerant priest throughout Italy, Germany, Bohemia, Austria, Hungary, Poland, and Russia, Saint John preached to tens of thousands. He reportedly healed the sick by making the Sign of the Cross over them. He also wrote extensively, mainly against the heresies of the day. His preaching attracted great throngs at a time of religious apathy and confusion. He and 12 Franciscan brethren were received in the countries of central Europe as angels of God. They were instrumental in reviving a dying faith and devotion. Together with Saint Bernadine of Siena, Saint John spread devotion to the Sacred Heart of Jesus, and Mary, Mother of God.

History tells us, “Saint John traversed the whole of Italy; and so great were the crowds who came to listen to him that he often had to preach in the public squares. At the time of his preaching all business stopped. At Brescia, on one occasion he preached to a crowd of one hundred and twenty-six thousand people, who had come from all the neighboring provinces. On another occasion during a mission over two thousand sick people were brought to him that he might sign them with the Sign of the Cross, so great was his fame as a healer of the sick.”

When the Turks captured Constantinople in 1453, Saint John was commissioned (at age 70) by Pope Callistus II to preach a crusade for the defense of Europe. Barefoot and dressed in his humble robe, Saint John visited the kings of Europe, uniting them and their armies against the invading forces. He led an army of 70,000 Christian soldiers to Belgrade, and when it appeared that they were outmatched by the Muslim army, he ran to the front lines. Holding his crucifix up high, this thin, small old man kept crying, "Victory, Jesus, victory!" Full of courage in Christ, the Christian army won an overwhelming victory and freeing the city from siege. Worn out by his age and efforts, Saint John succumbed to the infections present on the battlefield and died several months later. “An infinity of miracles” followed his death.

Saint John of Capistrano was a man of action, who gave up a successful and lucrative career and life to follow Christ. His commitment to the Word of God reminds us that the highest goal of this life is not worldly honors, but union with God in heaven. On his tomb in the Austrian town of Villach, the following message is inscribed: "This tomb holds John, by birth of Capistrano, a man worthy of all praise, defender and promoter of the faith, guardian of the Church, zealous protector of his Order, an ornament to all the world, lover of truth and religious justice, mirror of life, surest guide in doctrine; praised by countless tongues, he reigns blessed in heaven."

From the writings of Saint John of Capistrano:

“Those who are called to the table of the Lord must glow with the brightness that comes from the good example of a praiseworthy and blameless life. They must completely remove from their lives the filth and uncleanness of vice. Their upright lives must make them like the salt of the earth for themselves and for the rest of mankind. The brightness of their wisdom must make them like the light of the world that brings light to others. They must learn from their eminent teacher, Jesus Christ, what he declared not only to his apostles and disciples, but also to all the priests and clerics who were to succeed them, when he said, “You are the salt of the earth. But what is salt goes flat? How can you restore its flavor? Then it is good for nothing but to be thrown out and trampled underfoot.” Jesus also said: “You are the light of the world.” Now a light does not illumine itself, but instead it diffuses its rays and shines all around upon everything that comes into its view. So it must be with the glowing lives of upright and holy clerics. By the brightness of their holiness they must bring light and serenity to all who gaze upon them. They have been placed here to care for others. Their own lives should be an example to others, showing how they must live in the house of the Lord.”

Lord,
you raised up Saint John of Capistrano
to give your people comfort in their trials.
May your Church enjoy unending peace
and be secure in your protection.
We ask this through our Lord Jesus Christ, your Son,
who lives and reigns with you and the Holy Spirit,
one God, for ever and ever. Amen.

The letter of St John Capistrano to St Colette
November 1442

It can be your greatest friends that cause you the greatest anguish. St John wanted Colette to join his reform of the Franciscan order, accept his constitutions and submit to the jurisdiction of the friars he would appoint as visitators. He was full of sincere enthusiasm for the restoration of the Franciscan order - but he was not a Poor Clare and he had never lived the life Colette professed. Colette and her sisters prayed desperately to God that God would enlighten John’s heart and mind. And God did. John completely reversed his position. Not only did he not interfere with the life of the Sisters he place the Friars who had joined Colette’s reform under her jurisdiction and empowered her to appoint her own visitators. This is unique in Church legislation!


To Sister Colette of the Order of St. Clare, entirely devoted to Christ our Lord, our very dear daughter in the heart of the Spouse of virgins, John Capistran of the Order of Minors, on the part of the Apostolic See and the Most Reverend Father General wishes health and everlasting peace in the Lord.

Desiring, with a father’s affection, to console you in the Lord, I ratify and I confirm by these letters present, and declare ratified and confirmed all the favours which the Most Reverend Minister-General has accorded you and your chaplain, Pierre de Vaux, and the chaplains of the convents of nuns which you have built and will build

I declare that you have power to appoint one or more friars of our Order to fill the office of Visitator of the nuns in the said convents, or of friars who live in monasteries (of your way of life). To these friars so chosen, in virtue of these letters present, I accord and declare accorded the same faculties and the same power that preceding Ministers General have heretofore given these Visitators.

I ordain, in virtue of holy obedience, that the friars so named accept, the office of Visitator with respect, and that they fulfil it with diligence and devotion.

Given by me, at Besançon,
the eighth day of the month of November,
in the year of our Lord, 1442.


By the Poor Clare nuns of Galway, Ireland. A beautiful video on frescoes of St. Anthony of Padua and a short description of the event and/or miracle.
Posted by Chiara at 10:23 AM No comments: