Today, July 15th, is the feast day of St. Bonaventure, Bishop and Doctor of the Church 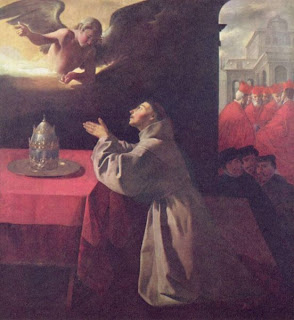 St Bonaventure is called the "Seraphic Doctor" because he revealed certain warmth toward others as a divine fire. His leadership with the Franciscans, following St Francis of Assisi, expressed itself by showing charity, goodwill and ardent affection toward others besides having great discernment in decision-making and judgement.

Do you really want to live and love passionately? Everyone loves cheerful, enthusiastic and unselfish givers. Our doctor's generosity and kindness toward others were fervent and caring.

How do we obtain that kindness and caring? St Bonaventure tells us to look carefully at the crucified Christ. Gradually this practice will enable us to become more compassionate and understanding toward others. People will begin to see God in you, even if you don't. Then, you will shine like a seraph, the highest rank of angels, as Bonaventure.

When we humble ourselves, reflect upon the crucified Lord often, and share unselfishly, acting with goodness toward others, Jesus mysteriously becomes alive in us, and is plainly seen by others. 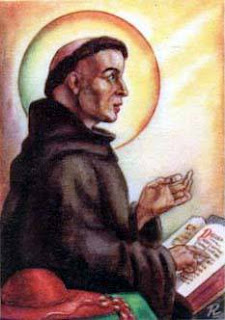 St. Bonaventure, known as "the seraphic doctor," was born at Bagnorea in Tuscany, in 1221. He received the name of Bonaventure in consequence of an exclamation of St. Francis of Assisi, when, in response to the pleading of the child's mother, the saint prayed for John's recovery from a dangerous illness, and, foreseeing the future greatness of the little John, cried out "O Buona ventura"- O good fortune!

At the age of twenty-two St. Bonaventure entered the Franciscan Order. Having made his vows, he was sent to Paris to complete his studies under the celebrated doctor Alexander of Hales, an Englishman and a Franciscan. After the latter's death he continued his course under his successor, John of Rochelle. In Paris he became the intimate friend of the great St. Thomas Aquinas. He received the degree of Doctor, together with St. Thomas Aquinas, ceding to his friend against the latter's inclination, the honor of having it first conferred upon him. Like St. Thomas Aquinas, he enjoyed the friendship of the holy King, St. Louis.

At the age of thirty-five he was chosen General of his Order and restored a perfect calm where peace had been disturbed by internal dissensions. He did much for his Order and composed The Life of St. Francis . He also assisted at the translation of the relics of St. Anthony of Padua. He was nominated Archbishop of York by Pope Clement IV, but he begged not to be forced to accept that dignity. Gregory X obliged him to take upon himself a greater one, that of Cardinal and Bishop of Albano, one of the six suffragan Sees of Rome. Before his death he abdicated his office of General of the Franciscan Order. He died while he was assisting at the Second Council of Lyons, on July 15, 1274.


More on St. Bonaventure: http://www.doctorsofthecatholicchurch.com/BO.html
Posted by Chiara at 11:32 PM No comments: