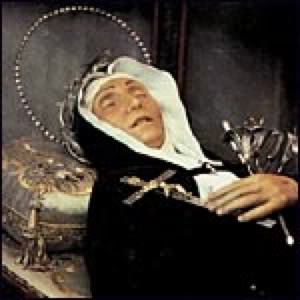 St. Veronica was born at Mercatello in Urbino, Italy, in 1660 and died at Citt' di Castello, on July 9, 1727. ...Her parents, Francesco Giuliana and Benedetta Mancini, were both of noble birth. Her baptismal name was "Ursula." As a child, she developed a deep spirituality and was blessed with extraordinary gifts. When she was 18 months old, her first words were reported to be "Do justice, God sees you." At age 3, she received visions from God and began to show great compassion for the poor, sharing both her food and clothing with them.

At the age of 17, she entered the convent of the Capuchin Poor Clares in Citt' di Castello, taking the name of Veronica in memory of the Passion. She became totally submissive to the will of her superiors, though her novitiate was marked by extraordinary interior trials and temptations to return to the world. At her profession in 1678 she experienced a great desire to suffer in union with our Savior crucified for the conversion of sinners. At this time, she had a vision of Christ bearing His cross and from that moment on, suffered an acute physical pain in her heart. After her death, the figure of the cross was found impressed upon her heart.

At the age of 33, she entered a new phase in her spiritual life, when she had a vision of the chalice symbolizing the Divine Passion, which was to take place within her soul. She then began to endure intense spiritual suffering. One year later, she received the impression of the Crown of Thorns, the wounds being visible and her pain permanent. At age 37, she received the stigmata in her hands, feet, and side during a long period of ecstasy on April 5, 1697. She was given medical treatment was given, but the wounds did not heal.

In spite of the fact that she lived a mystical life, Veronica was a practical woman who served as novice-mistress for thirty-four years, guiding her novices with both wisdom and prudence. At the age of 56 she was elected abbess, an office she held for 11 years until her death. She wrote a ten volume Diary of the Passion, which recorded her mystical experiences.

Veronica died of a stroke caused by a brain hemorrhage at the age of 67. She had told her confessor that the instruments of the Lord's Passion were imprinted on her heart, and she drew their positioning for him more than once as she said they changed location over the years. Her heart was examined after death and "miraculously" showed images of a cross, crown of thorns, and chalice, as she had said it would. Examination also revealed a curvature of the right shoulder as if she had carried a heavy cross.

Veronica was canonized by Gregory XVI in 1839. She is represented crowned with thorns and embracing the Cross.
Posted by Chiara at 11:41 AM No comments: