The Basilica of St Francis and the Sacro Convento

Pope Gregory IX laid the first stone of the Lower Basilica the day after the canonisation of St Francis, on July 17th 1228. Two years later the saint's body, that had been resting in the church of San Giorgio (the future church of St Claire's) was brought here in secret for fear of looting by tomb raiders and buried in the unfinished church. No date has been recorded concerning the start of works on the Upper Basilica, but it must have been after the abdication from the order of Brother Elia in 1239, who had hitherto directed the works on the Romanesque Lower Basilica.

Both churches were consecrated by Pope Innocent IV in 1253, before work was started on the large cycle of fresco decorations. The square outside the main facade did not exist at the time. A large flight of steps led upwards to the gothic entrance, pierced by a large rose window surrounded by the symbols of the four evangelists. This in turn was sealed off by a central drum. The lateral towers served as supports for the structure, while those near the choir contained stairs.

The benediction loggia on the left side of the facade, above the supporting curtain wall, was added in 1754 when the church was raised to the status of basilica. Another entrance was added in 1487, in front of the gothic entrance that stood above that of the Lower Basilica. This new work was by Francesco da Pietrasanta. The colonnade in the lower square is also from the 15th century, as well as the oratory of San Bernardino opposite the entrance to the Lower Basilica, built for the Third Order and with 17th century alterations in the interior. Given that there was little space for building on the hillside chosen for the entire complex, the massive supporting structure for the convent buildings and the papal apartments built in the 13th century and enlarged by the Franciscan Pope Sixtus IV between 1472 and 1474 had to stretch outwards in the opposite direction.

In the Lower Basilica the visitor arrives first at a transept that was built after the building of the church between 1280 and 1300. The lateral chapels opposite the entrance were added between 1350 and 1400. The ceiling of the single nave that runs the entire length of the Lower Basilica is supported by cross vaulting all the way to a semicircular apse at its farthest extremity, which is preceded by a transept with barrel vaulting in its lateral arms. Between 1300 and 1350 a series of chapels were opened up in the lateral wall of the transept and nave, wrecking the frescoes that once decorated the side wall.

Half way along the nave a stairway leads downwards to the crypt containing the remains of St Francis, discovered only in 1818. The crypt was in fact designed in 1822 by Pasquale Belli, and re-worked in neo-Romanesque style by Ugo Tarchi between 1925 and 1932. On the left hand wall of the entrance transept, next to the chapel of San Sebastiano, there is a gothic fresco of the "Madonna della Salute with the saints Antonio Abate, Francis and Rufino“, by Ceccolo di Giovanni (early 15th century). Opposite stands a gothic funerary monument to the Cerchi family of Florence, from the early 14th century. Another funerary monument, from between 1320 and 1330 stands a little further down the same side. It could be for either Jean de Brienne or Philippe de Courtenay, the Latin Emperor of Constantinople and bearer of the title of King of Jerusalem.

The style is similar to that of another sepulchre in San Domenico, Perugia, and to the sepulchre designed by Arnolfo di Cambio in San Domenico, Orvieto. There follows the chapel of Sant'Antonio Abate, with the sepulchre of the Duke of Spoleto Blasco Fernandez, assassinated along with his son Garcia in 1367. From here an exit leads to the old cemetary of the Lower Friars, with a two-order cloister.

The transept terminates with the chapel of St Catherine of Alexandria, designed by Gattapone in 1367. Cardinal Albornoz commissioned this chapel and was initially buried here. The frescoes of the "Life of St Catherine“ are by Andrea da Bologna (1368). A portrait of the cardinal is on the left wall. Mostly painted in tempera, the cycle of paintings that decorate the nave was completed around 1260 by an unknown artist, later known as the Maestro di San Francesco. It features episodes from the life of St Francis on the left side opposite episodes from the life of Christ on the right. When the lateral chapel were opened, several of these paintings were cut in half. Although the paintings are deteriorated, they are the most important examples of Tuscan wall paintings prior to Cimabue.

The high altar is from 1230, while the canopy above dates from the 14th century. Originally it was surrounded by twelve columns, as a direct analogy with the Holy Sepulchre in Jerusalem, but these were removed in 1870. The paintings in the vaults (1315-20) depict the "Apotheosis of St Francis“ and allegories of Obedience, Poverty and Chastity by the so-called Maestro delle Vele. The cycle of paintings on the right hand side of the transept (The Childhood of Christ, Posthumous Miracles of St Francis) is less unitary and is partly ascribable to the workshop of Giotto (1315-20). It also contains work by Cimabue ("Enthroned Madonna with Angels and St Francis“, 1280), and Simone Martini (1321-26 "Madonna with Child and Two Wise men“ and "St Francis, St Ludwig of Toulouse, St Elisabeth of Thuringia, St Claire and an Unknown Saint“).

Once decorated with frescoes depicting an allegory of the Crucifixion, the walls of the apse are now covered with a "Last Judgment" by Cesare Sermei di Orvieto. The fine gothic wooden choir was completed in 1471 by Apollonio Petrocchi da Ripatransone, with the help of Tommaso di Antonio Fiorentino and Andrea da Montefalco. The first chapel on the right hand side of the nave is dedicated to St Ludwig of Toulouse and St Stephen, with frescoes by Dono Doni (1575) and a stained glass window attributed to Simone Martini. This is followed by a chapel to St Anthony of Padua, frescoed by Cesare Sermei in 1610, and one to Mary Magdalene. This chapel has a series of frescoes by the workshop of Giotto (around 1320), depicting the life of the saint. On the lef side the chapel of San Martino is decorated with exquisite frescoes by Simone Martini (1321-26), depicting the life of St Martin and featuring portraits of St Anthony of Padua, St Francis, St Louis of France, St Ludwig of Toulouse, St Claire, St Elisabeth of Thuringia, St Mary Magdalene and St Catherine of Alexandria. Stairs lead up from either side of the choir to a cloister behind, built in 1476 by request of Pope Sixtus IV. From here one can access either the Upper Basilica or the Museo del Tesoro that houses reliquiaries, valuable manuscripts and vestments, works from the 13th century and two sinopites by Simone Martini and Jacopo Torriti. The adjacent rooms house the Perkins collection of precious 14th and 15th century panels. There is a fragment by Beato Angelico depicting "St Francis" (~1430), as well as a "San Rocco“ by Nicolò Alunno and "St Francis Receiving the Stigmata" by Antoniazzo Romano.


The layout of the Upper Basilica is an exact reflection of the original plan of the Lower Basilica. The single nave terminates in two lateral arms and a polygonal apse. But the airy, light, gothic architecture of the Upper Basilica, which displays French influences even though it is markedly individual in style, is in direct contrast with the heavy, crypt-like construction of its lower counterpart. The ceiling is cross-vaulted, and a gallery runs along the entire perimeter under the windows that are placed half way up the walls.

Coming up the stairs from the Lower Basilica, the visitor enters the Upper Basilica at the transept and choir. With the exception of the upper right hand side section, decorated between 1267 and 1270 by a Gothic and Roman artist, the decorations here are entirely by Cimabue and his workshop (~1280). The grandiose cycle is sadly in a poor state of conservation on account of the lead oxide used to mix the lighter shades and the colours used to paint the flesh, that have all oxidised black. Left hand section: "Crucifixion“, five "Apocalyptic Scenes“ and "St Michael and the Dragon“. Apse: "Story of Mary“; the inlaid wooden choir is by Domenico Indivini (1491-1501). Right hand section: "Episodes from the Life of St Peter“ and "Crucifixion“. Cross vaulting: "Four Evangelists“.

The walls of the nave contain a cycle of 34 episodes from the Old and New Testament painted above the gallery on the left and right hand side respectively, attributed to painters of the Rome School and followers of Cimabue. Only the scenes from the life of Isaac are thought to be an early work by Giotto (1290-95). The vault of the third span of the nave presents four medallions painted by Jacopo Torriti of Christ, Mary, John the Baptist and Francis. The first span is decorated with the "Four Doctors of the Church“: Jerome, Augustine, Gregory and Ambrose, attributed either to a young Giotto or to one of his followers. The walls under the gallery are covered with 28 frescoes of episodes from the life of St Francis (taken from "The Life of St Francis by San Bonaventura). There is considerable doubt as to whether the attribution to Giotto of these frescoes is correct. The clear differences with the cycle of the life of Isaac by the artist indicate that the cycle was probably painted by others, working from an original project by Giotto. The stained glass windows were the first decorative element to be completed in the church. Italy's backwardness in the technique for the production of stained glass at the time resulted in a German workshop being commissioned for the windows of the choir (the oldest), and a French workshop called in to make the windows of the left hand side of the church. Those on the right hand side have been attributed to the workshop of Maestro di San Francesco.
Posted by Chiara at 10:57 PM No comments: 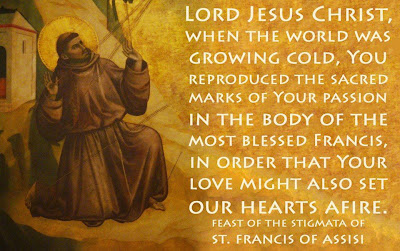 Posted by Chiara at 8:42 PM No comments: 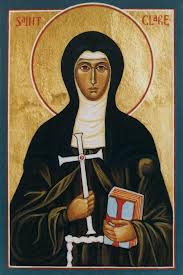 "The love of Jesus Crucified was at the heart of Clare's existence.  This is what gave her life direction, unity, dynamism and splendor."
- Fr. Rene Charles Dhont, OFM

Posted by Chiara at 6:39 PM No comments: 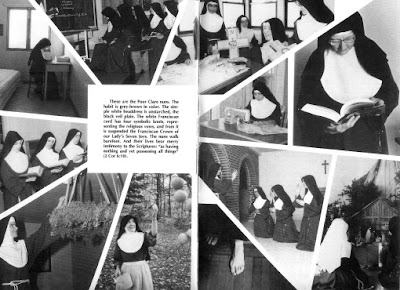 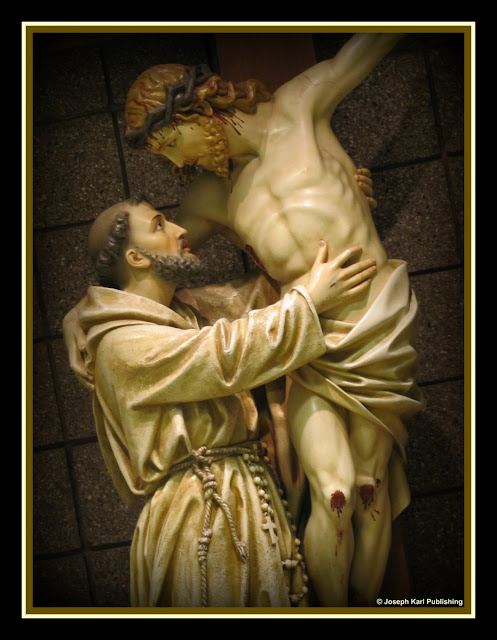 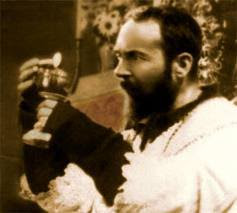 Posted by Chiara at 9:53 AM No comments: