Today is the Feast of St Elizabeth of Hungary 1207-1231, Patroness of the Third Franciscan Order 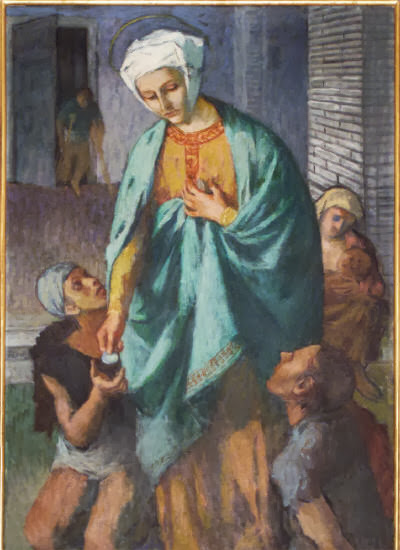 In 1207 a daughter was born to pious King Andrew II of Hungary. She received the name of Elizabeth in baptism. The child was so lovable that the wealthy landgrave of Thuringia and Hesse sought her as the bride of his eldest son Louis. His request was granted, and a solemn embassy went to get Elizabeth, then only three years old, so that she could be raised at her future husband's castle.

The two children loved each other like brother and sister, and vied with each other in acts of piety and charity. Those who beheld Elizabeth at prayer might well have believed they saw an angel. Her greatest joy was to give things to the poor. When she grew a little older, she visited the poor and the sick, and waited on them with as much reverence as if she were serving Christ Himself.
The proud dowager Landgravine Sophia was displeased with Elizabeth's conduct and endeavored to talk her son into sending Elizabeth back to Hungary and choosing a bride of more princely ways. But Louis was aware of the treasure he possessed in Elizabeth. Succeeding his father at the age of 18 he took over the government and married Elizabeth. Their marriage was unusually happy, and Louis gave his wife full liberty to do all the good her heart desired.
At Eisenach Elizabeth built a large hospital. During a famine she daily fed nine hundred needy people. The story is told that once when she was on her way with her cloak full of good things for her dear poor and sick, she met her husband, who teasingly blocked her path until she would show him what she was carrying away this time. How astonished was he to behold fresh, fragrant roses in midwinter. Reverently he permitted his spouse to go on her charitable way.

When Louis was away, it was Elizabeth's duty to take over the regency, and this she did with great prudence and care. Whatever spare time she had, she spent on the poor, the sick, and especially the lepers. It is related that once she took in a little leper boy whom no one cared to have about, and after caring for him as if he were her own child, placed him in the royal bed. But Louis returned unexpectedly at this time, and the angry dowager ran to tell him what Elizabeth had done and how she would surely cause him to be infected. Quite stirred, Louis went to the bed and tore aside the covers. But he was amazed and moved to tears when he beheld there the form of the Crucified. Turning to his wife he said, "Dear Elizabeth, you may always receive guests like that. I shall even thank you for it."

But Elizabeth, too, was to be tried by the crucible of suffering. Emperor Frederick II set out on a crusade to the Holy Land in 1227, and pious Landgrave Louis joined the expedition. But he died on the way, in southern Italy. When the news reached Thuringia, Louis' brothers rose up against Elizabeth. She was driven out of the palace; only two faithful maids went with her. In Eisenach the people dared not give her shelter fearing the resentment of the new masters. It was midwinter and night was at hand. The daughter of a king, a widowed princess, with four little children, the youngest scarcely 2 months old was completely destitute and homeless.

A man finally offered her shelter in a stable. Grateful for the kindness. Elizabeth thought of how the Son of God on coming down from heaven, was refused admittance at all doors of Bethlehem and found refuge in a stable. The thought filled her with greater joy than she had ever experienced in her palace. At midnight, when the bells of the nearby Franciscan convent, which she had built, announced the chanting of the Divine Office, she begged the friars to sing the Te Deum in thanksgiving for the favor that she and her children were made so like Jesus.

With her faithful servants, Elizabeth now arranged things as best she could. She spun flax for a livelihood, saving something from the meager income to give to the poor.

Later Elizabeth was reinstated in the Wartberg, and Emperor Frederick II, whose wife had died, asked her hand in marriage. But Elizabeth had so learned to love poverty and seclusion that she had no desire for worldly greatness. Her children were given the education due to princes, but she and her two maids repaired to a small house near the Franciscan church in Marburg. Elizabeth had joined the Third Order of St. Francis during the lifetime of her husband. Indeed, she was the first member in Germany, and received a message from St. Francis himself. Now, vested with the habit and the cord, she led a quiet religious life, meanwhile nursing the sick in the hospitals, and submitting her whole life to the direction of the learned and devout Friar Conrad.

Our Lord announced to her that He would soon call her to heaven. She told her Father Confessor, who had fallen seriously ill, that he would recover, but that she would die soon. Within 4 days she became ill, and was prepared for her final hour by her confessor, who had recovered.

Elizabeth was admitted into heaven on November 19, 1231, when she was only 24 years old. The miracles that took place at her tomb were so numerous that Pope Gregory IX canonized her already in 1235. She is the special patroness of the sisters of the Third Order Secular of St. Francis, and also of some religious sisterhoods of the Third Order Regular. Pope Leo XIII placed all charitable organizations of women under her patronage.


ON NOBILITY OF SOUL
1. Consider how noble Elizabeth was by birth: the daughter of a king, the wife of a prince who governed a beautiful and wealthy country. But nobility of soul meant more to her who was God's child, destined to serve the Most High here on earth, and to be an heir of the heavenly kingdom. Filled with the spirit of God, Elizabeth appreciated her dignity from childhood on. She found her sweetest delight in being united with God by prayer and pious practices, and her favorite occupation was to serve God in His poor and sick members. She did this with such holy sentiments that our Lord deigned to take the place of the leper she was nursing. She was always aware of the nobility of her own soul and acted accordingly. -- Is your soul not equally noble? Are your sentiments and conduct in keeping with your no nobility?


2. Many people believe that the way to maintain their dignity is by proud and domineering manners and by exterior pomp and finery. Elizabeth thought otherwise. She looked upon vain pomp as a form of slavery in which the soul basely serves the detestable vice of pride, the sin through which our first parents lost their nobility in Paradise. The Son of God gave His own blood to atone for that sin; and only by means of that royal purple have we been restored to the position of children of God. That is why Elizabeth loathed everything that savored of pride, always remaining as humble and submissive as a child. -- Do you permit the nobility of your soul to be sullied by pride and vanity?

3. Consider how almighty God prepares the soul, which He has endowed with such nobility, for its destiny in eternity. In company with all the angels and saints the soul is to enjoy the most intimate union with God. That is why God permits many trials and hardships to come upon human beings, so that their fidelity may be proved and everything unworthy may first be removed. But he who tries to escape the test of the cross and seeks sensual pleasures makes himself unworthy of nobility of soul and exposes himself to the danger of losing it. He who wants to be faithful to God but submits only imperfectly to His ordinances must pass through a severe purification in purgatory before he can enter heaven. Only the soul that has been thoroughly purified here on earth can be admitted to heaven immediately after death. When Elizabeth departed from this life, her soul was radiant in the full brilliance of its nobility. In trials she had thanked God in the words of the Te Deum; and then she submitted to the strict guidance of a confessor who completed the preparation of her soul for heaven. -- While there is time, prepare your soul so that, when you die, it may be ready for heaven.


PRAYER OF THE CHURCH

Enlighten, O God of mercy, the hearts of the faithful, and through the prayers of St. Elizabeth, do Thou cause us to think little of worldly prosperity and ever to be gladdened by the consolation which is of heaven. Through Christ our Lord. Amen.