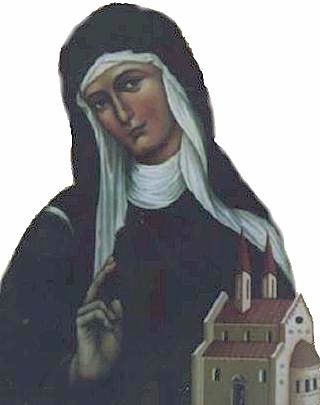 Agnes was the daughter of Premislaus, King of Bohemia,was born in Prague about the year 1205.  She declined an imperial marriage and in 1236 entered the monastery of the Poor Clares that she had founded and which she directed for many years.  She enjoyed a close friendship with St. Clare who wrote several letters to her dealing with Franciscan spirituality.  Agnes died between the years 1280-1283. - (from Proper Offices of Franciscan Saints and Blesseds in the Liturgy of the Hours)

On the eve of the feast of the holy virgin and martyr Agnes, in the year 1205, a daughter was born to the king of Bohemia, Primislaus Ottokar I. St Agnes of Prague, she also received the name Agnes in baptism. Her mother, who was an aunt of St Elizabeth of Hungary, rejoiced when she noticed an admirable seriousness in her infant. At times she saw how St Agnes of Prague folded her little hands in the form of a cross, and then, as if absorbed in deep devotion, would lie quite still.

According to the custom of the time, the king's daughter was betrothed at the age of three years to the son of the duke of Silesia, and hence was sent to the Silesain convent at Trebnitz, where St Hedwig was superior at that time, to be educated there. Her betrothed died after three years, and St Agnes of Prague was then taken to the convent at Doxan in Bohemia, where the seeds of sanctity which had been sown by St Hedwig budded forth in marvelous bloom. The child appeared to be destined for the heavenly Spouse rather than for an earthly one; but earthly monarchs renewed their suit for her hand.

Emperor Frederick II desired to secure St Agnes of Prague as the bride of his son and successor to the throne, Henry, and Agnes, who was now a mature young woman, was sent to the court of the German emperor. But when the union with Henry came to naught as the result of the prayers of the virgin, King Henry III of England sought her hand in marriage, and finally, even Emperor Frederick II himself, whose consort had meanwhile died. All the opposition raised by St Agnes of Prague, who desired to belong entirely to the Divine Bridegroom, seemed in vain. Then she begged Pope Gregory IX to intervene, and as a result she obtained her freedom. The emperor declared himself satisfied since Agnes chose not a human being but the God of heaven in preference to him. 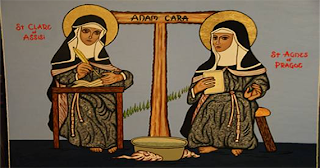 Now, however, Agnes strove to embrace the religious state in order to achieve her union with the Divine Bridegroom. The fame of Poor Clare convents had reached Bohemia, and Agnes resolved, with the assistance of her brother, who had meanwhile ascended the royal throne, to establish a convent of Poor Clares in the capital city of Prague. Pope Gregory cheerfully gave his consent, and, at his command, St. Clare sent five sisters from the convent of St. Damian in Assisi, to Prague. Agnes and seven other young women of the highest ranks of society entered the new convent together with these sisters.

Within a short time Agnes distinguished herself among them as a model of virtue; in fervor at prayer, in obedience, in religious discipline, in self-denial, and in humility. The command of the pope to accept the position of abbess was a great trial for her humility; however, she obtained permission not to carry the title, but rather to be known as the "senior sister." Holy zeal, similar to that of her holy mother St. Clare, characterized her vigilance regarding the observance of holy poverty; she declined the royal gifts sent to her by her brother, and would not tolerate that any sister possess anything of a personal nature.
God blessed her with the gift of miracles; she recalled to life the deceased daughter of her brother.

Enriched with heavenly merits, she departed from this life in the odor of sanctity, to enter into eternal union with her Divine Bridegroom, on March 6, 1282, having served Him for forty years in the religious state. Devotion to her, which has existed since time immemorial, received apostolic sanction from Pope Pius IX, and her feast, which has long been celebrated in Prague on March 2nd, has been extended to the entire Franciscan Order.

*from: The Franciscan Book of Saints, ed. by Marion Habig, ofm.

Posted by Chiara at 9:23 AM No comments: