"Praise, praise all the time, praise without end, and love the Father, the Son and the  Holy Spirit; and the most humble Virgin who bore Jesus Christ..."
St. Colette

Nicollete Boilet was born at Corbie, Picardy, in France and was named in honor of St. Nicholas of Myra. Her loving parents, who were almost sixty years old when she was born, nicknamed her Colette from the time she was a baby.

Colette's father was a carpenter at an abbey in Picardy. Quiet and hard-working, Colette was a big help to her mother with the housework. Her parents noticed how their daughter liked to pray and her sensitive, loving nature.

When Colette was seventeen, both her parents died and the young woman was placed under the care of the abbot at the monastery where her father had worked. She asked for and received a hut built next to the abbey church, where she lived.

She spent her time praying and sacrificing for Jesus' Church. More and more people found out about this holy young woman. They went to see her and asked her advice about important problems. They knew that she was wise because she lived close to God. She received everybody with gentle kindness. After each visit, she would pray that her visitors would find peace of soul.

Colette was a member of the Third Order of St. Francis called the Secular Franciscan Order. She knew that the religious order of women who followed St. Francis' lifestyle are the Poor Clares. They are named after St. Clare, who as a follower of St. Francis started the order. During Colette's time, the Poor Clares strayed from their mission and needed to go back to the original purpose of their order.

St. Francis of Assisi appeared to Colette and asked her to make the necessary changes. She was surprised and afraid of such a difficult task. When she hesitated, she was struck blind for three days and mute for three more; she saw this as a sign, and trusting in God's grace traveled to the Poor Clare convents. As an example, she walked barefoot to Nice, dressed in a habit (gown worn by nuns) that was all patched up. She helped the nuns become more poor and prayerful.

The Poor Clares were inspired by St. Colette's life. She had a great devotion to Jesus in the Eucharist. She also spent time frequently fasting and meditating on the passion and death of Jesus. She loved Jesus and her religious life very much.

Her prayer was, "We must faithfully keep what we have promised. If through human weakness we fail, we must always without delay arise again by means of holy penance, and give our attention to leading a good life and to dying a holy death. May the Father of all mercy, the Son by his holy passion, and the Holy Spirit, source of peace, sweetness and love, fill us with their consolation. Amen."

She was very fond of animals and took good care of them. Colette knew exactly when and where she was going to die. She died in one of her convents in Ghent, Flanders, in 1447 at the age of sixty-seven.

Epitaph - the ideals of St. Francis

(More from Emmaberry:  Mother Mary Francis, PCC?  Must ask her!)  This is another beautiful poem:) 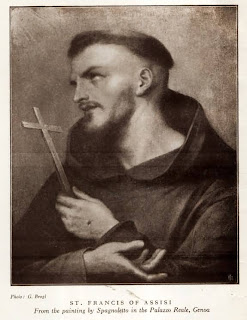 EPITAPH
Here lies the ideals of Saint Francis,
Pressed in the folds of earth, the little plant,
Drooped to a smile of meager flesh and bone.

Here lies the triumph of the little poor man,
The lovely, wasted witness to his dream.
Bring no polite compassion to her coffin
And stay the pitying upward flight of brow
For Francis and his dream without a haven,
His mad impossible schemes. Here lies the proof
His dream was wholly possible to her heart.

Here lies the refutation for crawling cautions;
Sweet, mute rebuttal to any compromise.
Her crypt is full of flower talk, and gladly
The stars come swimming down to kiss her face
Caught in its quiet splendor. Be still! Be still!
The place is full of angel talk or song.

Here lies the fragile flower of Saint Francis
Stronger than armies! here, the unswerving gaze
Shuttered at last on earth, and turned on Godhead.

Here lies the testimony to Saint Francis:
Clare of Assisi. 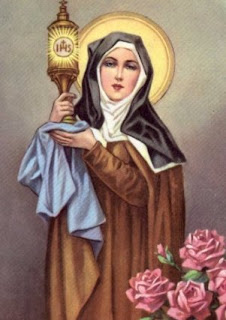 Who weeps, weep but for joy.

Posted by Chiara at 1:58 PM No comments:

From my friend, Emmaberry, a fellow PCC-to-be! Not sure as her post didn't say, but this maybe one of Mother Mary Francis, PCC's poems below:

"The Sisters fast every day except on Sundays and Christmas, never eat meat, rise at midnight for prayer and meditation, wear a coarse habit, and always go barefoot."

From: Explanation of the Rule of St. Clare

You wonder
at survival through death-bleached hours,
sere plains, incommiserate sands.
And you are afraid.

Oh! leave those timorous chains
that bind you
in the dark dungeon of age-old compromise!
Unchained, your heart shall dare
these sands unfearing
and oh! a thousand times
will almost find the reason
just there between the sunlight and the silence.

There will be
the sudden leap of longing
in the soul pregnant with faith and hope,
arms outflung without any willing,
singing pain in the heart,
words splintering helplessly,
the whole sky unslung,
star-desolate, moon-empty,
the rumor of Him quivering everywhere.

And when this flash of the reason
is gone
out of hand's grasp,
heart's reach,
furious will's shouting,
the sands will blaze
with gorgeous recall
and plains go quick-cool
beneath the feet.

Recall indeed will fade
but then perhaps
there will be another moment
rocketed out of eternity,
out of reality,
runaway, splendid, sustaining,
when you will almost hold Him
and your hands almost grasp
the reason.

These are the moments
that make for survival;
and one will not end,
being death.
Posted by Chiara at 1:53 PM No comments:

"When you are unable to take big steps on the path that leads to God, be content with little steps, patiently waiting until you have the legs to run; or better still, wings to fly. Be content with being, for now, a little bee in a hive, which will soon become a big bee, capable of producing honey." St. Padre Pio

Today is the Feast of St. Nicholas! 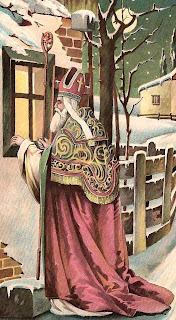 God, Our Father, we pray that through Your intercession of St. Nicholas you will protect our children. Keep them safe from harm and help them grow and become worthy in Your Sight. Give them strength to keep their Faith in You; and to keep alive their joy in Your creation. Through Jesus Christ Our Lord. Amen. Have a blessed Feast of St. Nicholas!


(Photo of the very spot upon which St. Francis of Assisi built the very first Christmas Creche (Nativity Scene) located in Greccio, Italy.)

"May the peace and love and joy of our Lord Jesus Christ be with you this Christmas and every day of your lives. We offer this little story about St. Francis at Greccio—from the Major Legend of St. Francis-- for your reflection and meditation. The tradition of the crèche (or crib) originates with St. Francis and is uniquely Franciscan contribution to the celebration of Christmas. Know that we, your Franciscan brothers, are keeping you in our prayers at this most sacred time as you continue to discern God’s will for you in your hearts and in your lives. Merry Christmas!"

“It happened, three years prior to his death, that he (Francis) decided to celebrate at the town of Greccio the memory of the birth of the Child Jesus with the greatest possible solemnity, in order to arouse devotion. So that this would not be considered a type of novelty, he petitioned for and obtained permission from the Supreme Pontiff.

"He had a manger prepared, hay carried in and an ox and an ass led to the spot. The brethren are summoned, the people arrive, the forest amplifies with their cries, and that venerable night is rendered brilliant and solemn by a multitude of bright lights and by resonant and harmonious hymns of praise. The man of God stands before the manger, filled with piety, bathed in tears, and overcome with joy.

"A solemn Mass is celebrated over the manger, with Francis, a levite of Christ, chanting the holy Gospel. Then he preaches to the people standing around him about the birth of the poor King, whom, whenever he means to call him, he called in his tender love, the Babe from Bethlehem.

"A certain virtuous and truthful knight, Sir John of Greccio, who had abandoned worldly military activity out of love of Christ and had become an intimate friend of the man of God, claimed that he saw a beautiful little child asleep in that manger whom the blessed father Francis embraced in both of his arms and seemed to wake it from sleep.

"Not only does the holiness of the witness make credible the vision of the devout knight, but also the truth it expresses proves its validity and the subsequent miracles confirm it. For Francis's example, when considered by the world, is capable of arousing the hearts of those who are sluggish in the faith of Christ.

The hay from the crib was kept by the people and miraculously cured sick animals and drove away different kinds of pestilence. Thus God glorified his servant in every way and demonstrated the efficacy of his holy prayer by the evident signs of wonderful miracles.”

(above taken from FB page of the Hermitage and Retreat Center)
Posted by Chiara at 12:37 PM No comments: 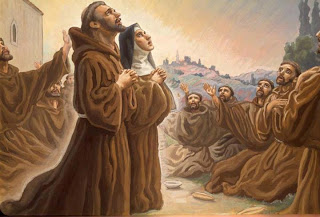 "God alone must we fear. We must despise devils but never, NEVER, fear them, for our greatest weapons against them is living chaste lives and having confidence in God. Why? It's very simple; the devils hate ascetics' prayers, fasting, peacefulness, meekness, scorn for wealth and vainglory, love for the poor, their humility, and most of all, their devotion to our Lord and Savior, Jesus Christ." - from friend on Facebook

St. Clare's and Her Sister's Dormitory

Photo of the Dormitory Room in which St. Clare of Assisi lived with 40 of her sisters, sleeping on straw mats and St. Clare used a rock for a pillow. The flower pot on the right is the very spot where Clare slept and died.